Home > Back to Search Results > The Declaration of Independence, and more...
Click image to enlarge 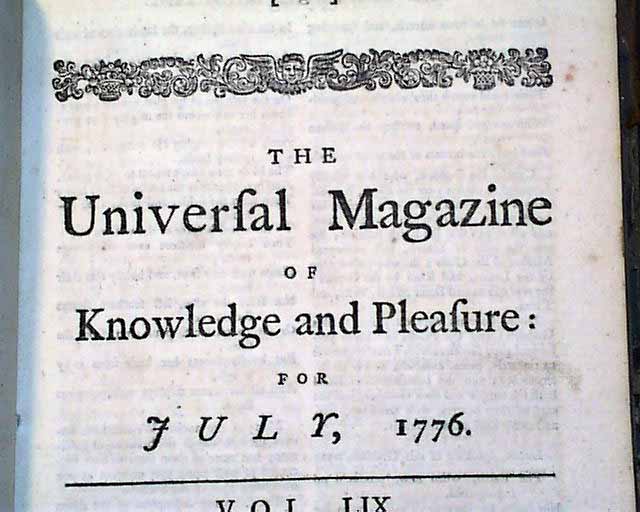 Item # 681282 THE UNIVERSAL MAGAZINE, London, England, complete bound volume of six months for July thru December, 1776 plus the Supplement issue as well.

It would be difficult to argue for a more important document in American history than the Declaration of Independence. It remains a desire of most collectors to find issues containing reference to it, and ultimately a contemporary printing of the actual document. With American newspaper printings commanding $100,000 or more in nice condition--if available--here is an opportunity for a period printing at a very reasonable price.
And this is one of the less common magazine titles of the 18th century. More typically when we come across this document it is in the "Gentleman's Magazine" from London, but this is the much more scarce "Universal Magazine" although formatted very much like the Gentleman's.
The Declaration appears in the August issue, as was the case with the other British magazines, and the report has a banner headline: "AMERICAN INTELLIGENCE" beneath which is: "In Congress, July 4, 1776" "A Declaration by the Representatives of the United States of America, in General Congress Assembled" followed by the complete text beginning with the famous words: "When in the course of human events...". The document concludes two pages later and is signed in type by: John Hancock (see the photos for the complete printing).
One can imagine the reaction in England to those reading this report in their own magazine.
But there is much more in this volume as well. As would be imagined each of the monthly issues contains news relating to the Revolutionary War in America. Plus 16 of the 18 plates called for in the volume are still present (more typically removed), the two that are missing were maps relating to America. But neither of these maps were in the August issue, so the issue with the Declaration of Independence is complete.
As was typical of the Universal Magazine there are no full title/index pages present for each monthly issue as such were incorporated into the outer wrappers which were removed when the issues were bound. For this reason we keep the complete volume intact, just the way it was provided by the bindery.
Bound in three-quarter leather binding with marbled boards, with portions of the marbled paper removed and various wear to the leather. A label & gold ink at the spine with the "6" in 1776 being lost. The interior pages are in great condition and very clean. Boards are tightly bound.
Certainly a keystone issue for any collection of American history and the very first of this title we have offered in many, many years.

Historic Proclamation by the King for...