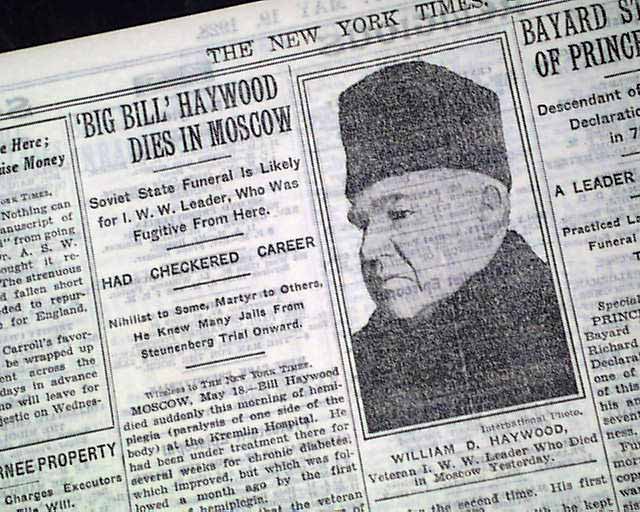 The top of page 13 has a one column heading: "'BIG BILL' HAYWOOD DIES IN MOSCOW" with subheads and photo. (see) First report coverage on the death of William Dudley Haywood, advocate of industrial unionism.
Other news, sports and advertisements of the day. Complete in 32 pages, this is the rare rag edition that was produced on very high quality newsprint, with a high percentage of cotton & linen content, allowing the issues to remain very white & sturdy into the present. Given the subscription cost, libraries & institutions rather than individuals were the primary subscribers of these high-quality editions. A little irregular along the spine, nice condition.

wikipedia notes: William Dudley Haywood better known as "Big Bill" Haywood, was a founding member and leader of the Industrial Workers of the World (IWW) and a member of the executive committee of the Socialist Party of America. During the first two decades of the 20th century, he was involved in several important labor battles, including the Colorado Labor Wars, the Lawrence Textile Strike, and other textile strikes in Massachusetts and New Jersey.