Home > Back to Search Results > Parade in Carlisle for Olympic champion JimThorpe...
Click image to enlarge 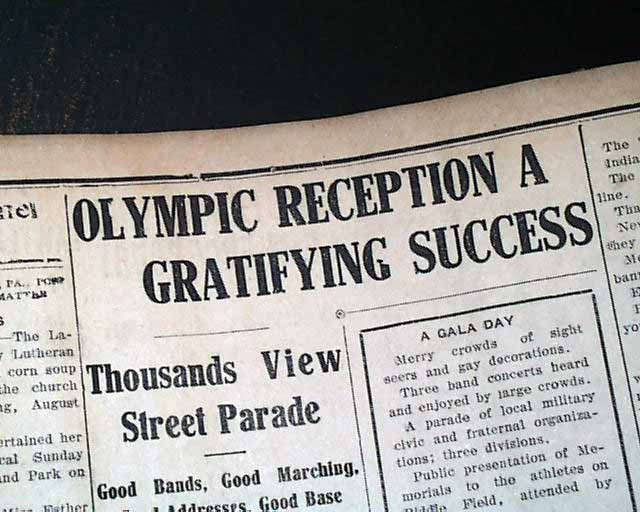 
VALLEY SENTINEL, Carlisle, Pennsylvania, August 20, 1912  Although legendary athlete Jim Thorpe was born & grew up in Oklahoma, he has very close ties with the city of Carlisle. It was in 1904 when Thorpe attended the Carlisle Indian Industrial School that his incredible athletic prowess was discovered by "Pop" Warner, one of the most influential coaches in early football history. He also competed in football, baseball, lacrosse, and even won the 1912 inter-collegiate ballroom dancing championship.
Thorpe came to national attention during the 1911 football season as a running back, defensive back, placekicker, and punter, leading his team to the national collegiate championship in 1912, the year in which Carlisle's victory over Army included an injury by future President Dwight Eisenhower while attempting to tackle Thorpe.
But it was in track and field where he won Olympic gold at the 1912 Olympics in Stockholm, Sweden, for both the pentathlon and decathlon.
Only in this newspaper--from Carlisle--could this report be found, with page four having two and one column headlines: "OLYMPIC RECEPTION A GRATIFYING SUCCESS" "Thousands View Street Parade" "Good Bands, Good Marching, Good Addresses, Good Base Ball, Good Fireworks" "Everybody Delighted" and more. The article is excellent and very detailed on all aspects of the parade, ceremonies, and speeches (see photos for the full text). Note that fellow Carlisle student Louis Tewanima was also a stand-out at the Olympics.  There is also considerable reporting concerning Glenn S. "Pop" Warner, the football coach (see). As for Thorpe's speech, he was a man of few words: "All that Mr. Thorpe said, was: 'All I can say is, that you showed me a good time.' "
The back page of this issue has very nice coverage extending to three columns on Thorpe's accomplishments at the Olympics, with heads: "JAMES THORPE, THE CARLISLE INDIAN, IS WORLD'S GREATEST ALL-AROUND ATHLETE" "He is A Marvel of Physical Strength" "Will be Seen on Football Field as Indians' Captain this Fall" "Won Two Leading Events in Olympic Games" "Record of His Performances in the Pentathlon and Decathlon" (see). The other column reports on the two "special" awards won in Sweden beyond the gold medals: "Two Olympic trophies have Come to Carlisle' "James Thorpe Won Both Of them--Viewed by Thousands" "One is bust of King of Sweden--The Other Norse Viking Ship"
Page 4 has welcome home reporting.
Terrific reporting and only in a Carlisle newspaper would such an accounting be found. Complete in 8 pages, light browning with minor margin wear, otherwise good condition. Should be handled with care.