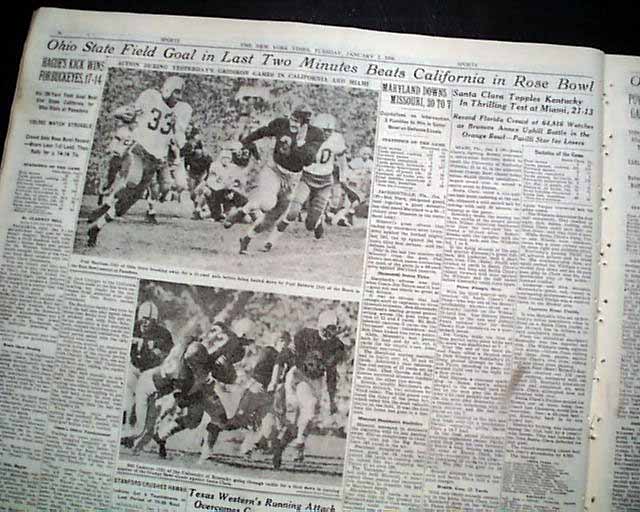 The sport's section (page 26) has a banner headline: "Ohio State Field Goal in Last Two Minutes Beats California in Rose Bowl" with subhead. (see) The top of page 16 has a two column headline: "Buckeyes Down Bears In Rose Bowl Thriller" with subheads, photo and stats. (see) Also reports on the Orange, Cotton and Sugar Bowl games. Always nice to have notable events in history reported in this World famous publication.
Other news, sports and advertisements of the day. Complete in 92 pages, this is the rare rag edition that was produced on very high quality newsprint, with a high percentage of cotton & linen content, allowing the issues to remain very white & sturdy into the present. Given the subscription cost, libraries & institutions rather than individuals were the primary subscribers of these high-quality editions. Nice condition.

wikipedia notes: The 1950 Rose Bowl was a college football bowl game played between Ohio State University and University of California at the Rose Bowl in Pasadena, California. The game was a rematch of the 1921 Rose Bowl where both Ohio State and Cal both played in the teams' first bowl game. Ohio State came out with the win, 17-14. The MVP was Fred "Curly" Morrison of Ohio State.