Home > Back to Search Results > Battle of Murfreesboro in a Confederate newspaper...
Click image to enlarge 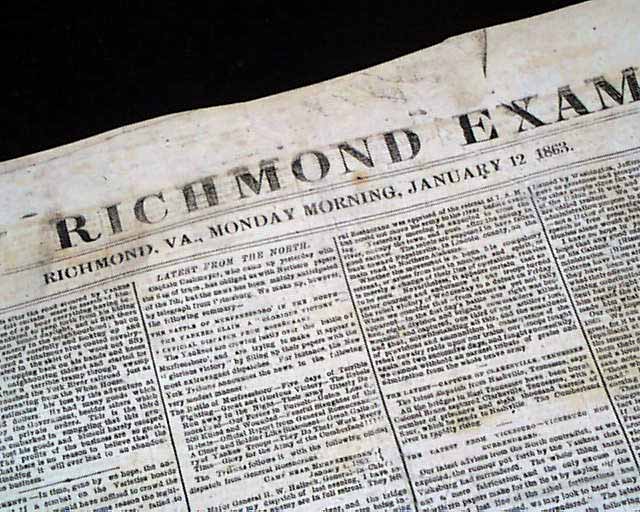 Battle of Murfreesboro in a Confederate newspaper...

* Battle of Murfreesboro, Tennessee
* From the capital of the Confederacy

There is much war reporting here, from the Confederate perspective, including front page items with small heads: "Treatment of Negroes in the Government Service" "Yankee Army Coming" "Raising A Company" "Catching Deserters" "Latest From the North--The Battle of Murfreesboro in the North--The Yankee Claim a 'Glorious Victory'--Official Dispatch from Rosecranz" includes 2 dispatches on this historic battle signed by him in type: W. S. Rosecranz[s]. "The Yankee Secretary of War in Exultation Over the News" "The Enemy's Loss--Some of their Killed & Wounded" "The Enemy Acknowledge A Great Defeat At Vicksburg" "The Situation In North Carolina" "The Latest From Vicksburg--Vicksburg Not Surrendered" and even more.
The back page has even more on the recent battle of Murfreesboro, with heads: "The Battle Of Murfreesboro--Bragg's Instructions Before the Battle--Plan of the Battle--Strength of the Two Armies--Disposition of Our Troops--The Battle Field, The Losses, etc." includes the list of instructions signed in type: Braxton Bragg.
Also on the bkpg. is: "Late Northern News" and reports from the Virginia Legislature, as well as a lengthy editorial on the Civil War which begins: "It may be premature to suppose that the war is approaching its end; and it would certainly be ruinous to relax our military energies in such an idea...a leading cabinet officer having confidently asserted that it would transpire in sixty days. Within that sixty days, instead of peace, came a series of disasters, ending with the surrender of New Orleans..." plus much, much more.
Complete as a single sheet newspaper, some very minor edge wear, generally in nice condition. Simply a great wealth of reporting on the Civil War, with an emphasis on the significant Battle of Murfreesboro.