Home > Back to Search Results > Critical of the Howes in New York...
Click image to enlarge 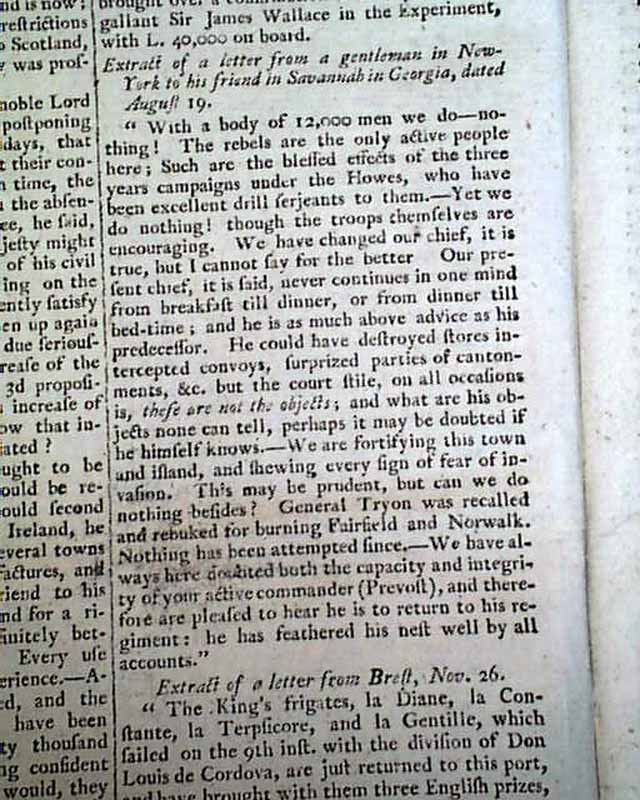 Critical of the Howes in New York...

Page 2 has a letter from New York to his friend in Savannah, Georgia, noting in part: "With a body of 12,000 men we do---nothing! The rebels are the only active people here. Such are the blessed effects of the 3 years campaigns under the Howes...We have changed our chief, it is true, but I cannot say for the better..." with more critical comments.
Page 5 has reports including: "...that Count D'Estaing had put into Chesapeak Bay...It was thought prudent to evacuate Rhode Island & the garrison was safe arrived at New York...certain accounts had been received of violent dissentions between the congress and Arnold's party, which caused Mr. Washington to quit the Jerseys with his army & to encamp at German-Town, close to Philadelphia, in order to support Congress who are daily losing ground...".
Eight pages, 8 1/2 by 11 1/4 inches, dirtiness & rubbing at the folds of the front page only, slightly closes-trimmed at the bottom of two leaves but not affecting any mentioned reports, generally good.