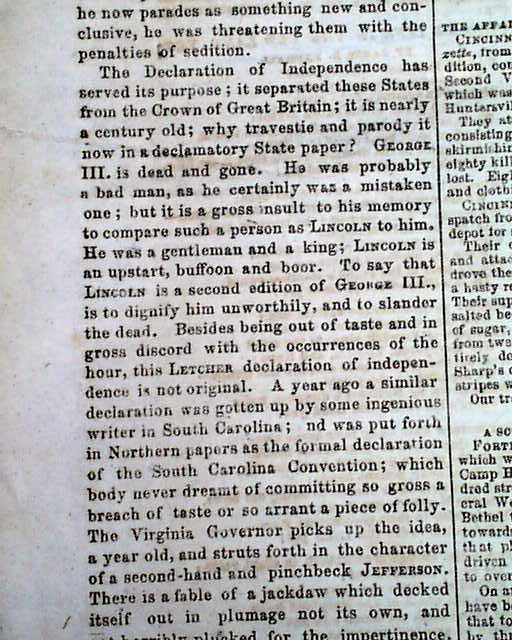 Half of the front page is taken up with ads, and half with news & other items including: "The Case of Brownlow" "Mr. Thomas' Plan for the Reorganization of the Virginia Forces" "There's Life in the Old Land Yet" "Scraps For War Times" and a few other smaller items.
Page two includes the always interesting editorial which focuses in part on a comparison of King George III of England and Abraham Lincoln, one part noting: "George III is dead and gone. He was probably a bad man, as he certainly was a mistaken one; but it is a gross insult to his memory to compare such a person as Lincoln to him. He was a gentleman and a king; Lincoln is an upstart, buffoon and boor. To say that Lincoln is a second edition of George III is to dignify him unworthily, and to slander the dead..." with more.
Also on page 2 is: "The Latest Northern News--Movements and Spirit of the War" "The Northern Congress--Discussion Of The War" "The Case of Mr. Hinrich" "The City Fortifications Again" "Legislature of Virginia" 'The Mississippi Sound--Biloxi" and "Surveillance Over the Newspapers".
Four pages, folio size, never bound nor trimmed (desired), minor wear at margins but generally in nice condition.