Home > Back to Search Results > Thoughts on the closing events of the Revolutionary War...
Click image to enlarge 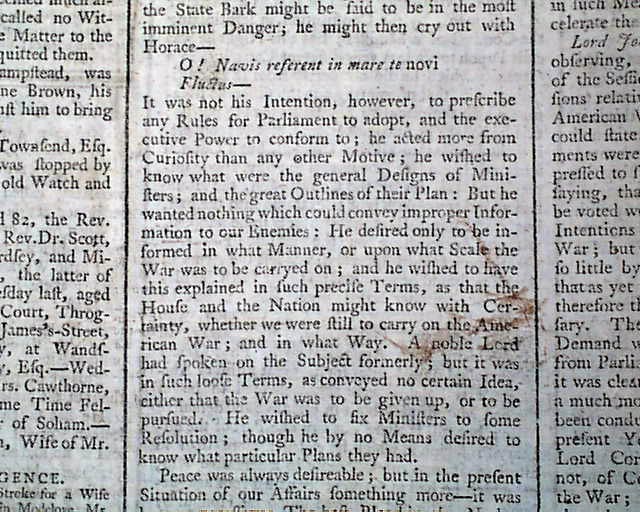 Thoughts on the closing events of the Revolutionary War...

Page 3 has much on the situation in America. A few bits include: "...Peace was always desirable; but in the present situation of our affairs something more--it was become necessary: the best blood in the nation had been shed in a fruitless war & the resources of the country were exhausted...The barbarities exercised upon the Americans by our troops...and the murthers (sic) committed by them on the people of the country were sufficient to alienate the affections of a nation...It was not possible that we could carry on the war for ever; it must some time or other have an end...he could not call the war in America the American War; its true nat was the French war, for, if he was not greatly mistaken, and he believed he spoke from good authority, the Army under General Washington in general, and the whole of the American Continental Army, was fed, clothed, and paid by France..." and much more. The full text of this discussion takes 3 1/2 columns.
Fascinating reading on the closing events of the Revolutionary War.
Four pages, never bound nor trimmed, red tax stamp on the front page, very nice condition.