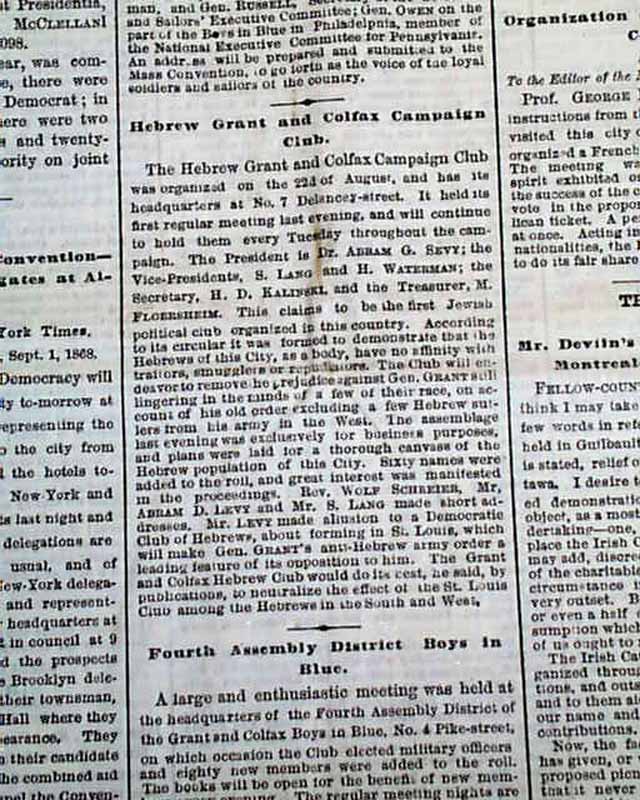 NEW YORK TIMES, Sept. 2, 1868  Page one includes: "Hebrew Grant and Colfax Campaign Club", which, as noted within the text: "...headquarters at No. 7 Delancy Street. It held its first regular meeting last evening...This claims to be the first Jewish political club organized in this country. According to its circular it was formed to demonstrate that the Hebrews of this city, as a body, have no affinity with traitors, smugglers, or repudiators. The Club will endeavor to remove the prejudice against Gen. Grant still lingering in the minds of a few ...on account of his old order excluding a few Hebrew sutlers from his army in the West..." with more.
Ironically their first order of business was to distinguish Jewish prejudice against Ulysses S. Grant for his General Order #11, known as the infamous "Jew Order", a controversial order which is considered to be the most anti-Semitic official act in American history.
As Wikipedia notes, Grant's General Order #11 and antisemitism became an issue during the 1868 presidential campaign. In a letter, published after the election, Grant sought to unequivocally distance himself from General Orders No. 11: "Grant's self-serving explanation", notes Jonathan Sarna, "did not actually bear close scrutiny," but Jews nonetheless generously accepted his attempt at self-extrication: "I have no prejudice against sect or race, but want each individual to be judged by his own merit. Orders No. 11 does not sustain this statement, I admit, but then I do not sustain that order. It never would have been issued if it had not been telegraphed the moment it was penned, and without reflection."  Though Jewish opinion was mixed, Grant's determination to court Jewish voters ultimately resulted in his capturing the majority of that vote, though Grant did lose some Jewish votes as a result of the order.
Eight pages, irregular along the spine with some archival mends and older binding remnants, otherwise nice condition.