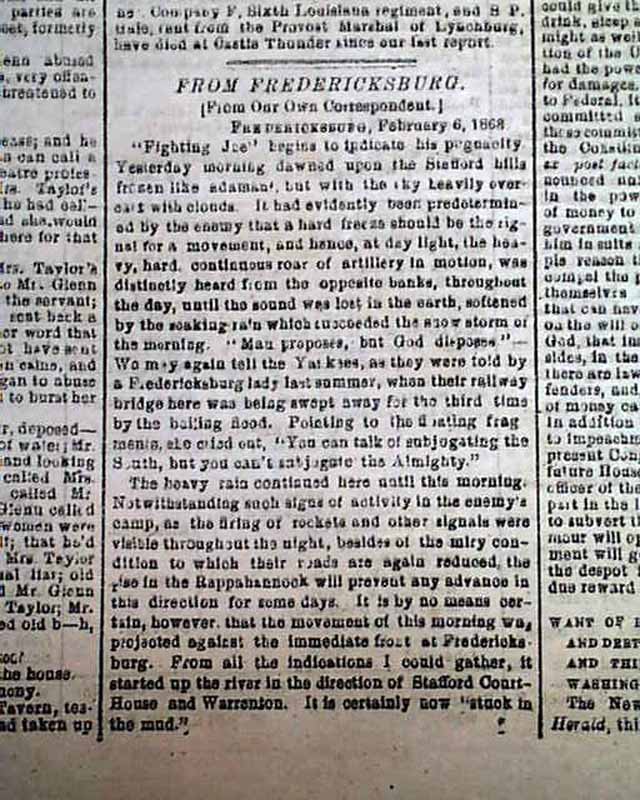 A nice newspaper from the capital of the Confederacy. The front page includes: "Additional From The North" "The Revolution in the North--Great Indignation at the Military Arrests of the Administration..." "Disaffection In The Yankee Army--the Soldiers Refusing to Fight--Their Confessions of the Atrocities of Their Men" "The Latest from the North--Reorganization of the Army of the Potomac--The Next On To Richmond to Be by a New Route--Later From Vicksburg--Fort Donelson Attacked By the Rebels--A Dash Into Warrenton" "From Fredericksburg".
The back page includes the always interesting editorial, this one including in part: "...It may be that no great genius has been displayed by the Yankee Cabinet of the Yankee Generals in conducting the war..." and near the end: "...Let the Northern Democrats  & the Northern people understand & recognize this fact. The Lincoln Administration have many sins to answer for, but the sin of intimidity or want of zeal & vigour  in conducting the war is not theirs...the South could not be conquered...the task is demonstrated to be hopeless and impossible." Much of the back page is taken up with reports from: "The Confederate Congress" and the: "Virginia Legislature".
Complete as a single sheet newspaper with a banner masthead, never bound nor trimmed, a few minor archival mends at margins, generally in very nice condition.