Home > Back to Search Results > The first "learned society"...
Click image to enlarge 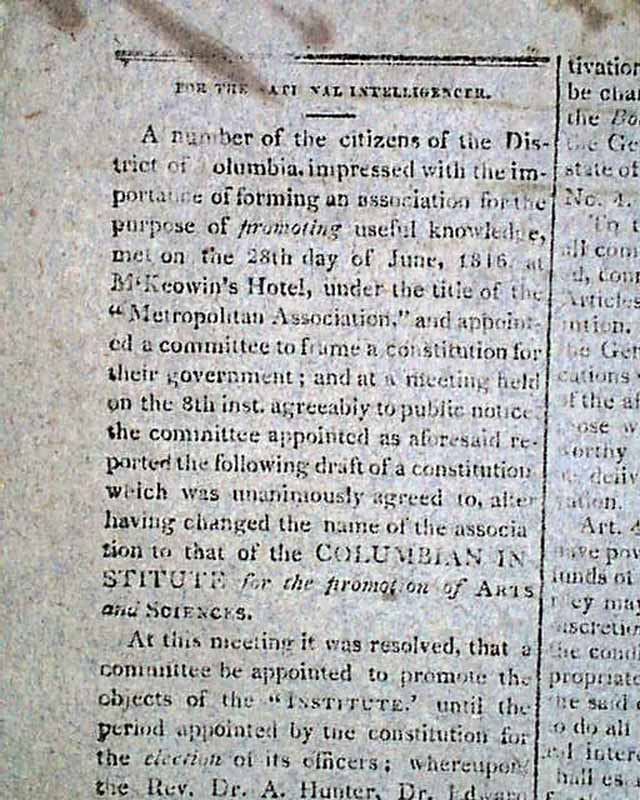 
NATIONAL INTELLIGENCER, Washington, D.C. August 15, 1816  The second page carries an article "A number of the citizens of the District of Columbia, impressed with the importance of forming an association for the purpose of promoting useful knowledge, met on the 28th day of June, 1816,... agreeably to public notice the committee appointed as aforesaid reported the following draft of a constitution which was unanimously agreed to, after having changed the name of the association to that of the COLUMBIAN INSTITUTION for the promotion of Arts and Sciences..." The "Constitution of the Columbian Institution" then follows in detail.
This was the first "learned society" established in Washington. The second article of its constitution states: "The Institute shall consist of mathematical, physical, moral and political sciences, general literature and fine arts."
They were responsible for the acquiring the many different species of plants and trees, an idea to apply to Congress for "the appropriation of about 200 acres of ground called "the Mall" which was designed in the original plan of the city for a public garden, the beginning of the botanic garden, many items which are now in the Smithsonian Institute, and more.
Membership consisted of many prominent people of the day, including some of the Presidents.
Other news and advertisements of the day are within.
Complete in four pages and in very nice condition.