Home > Back to Search Results > Mutuals win the championship... Each inning telegraphed to other cities....
Click image to enlarge 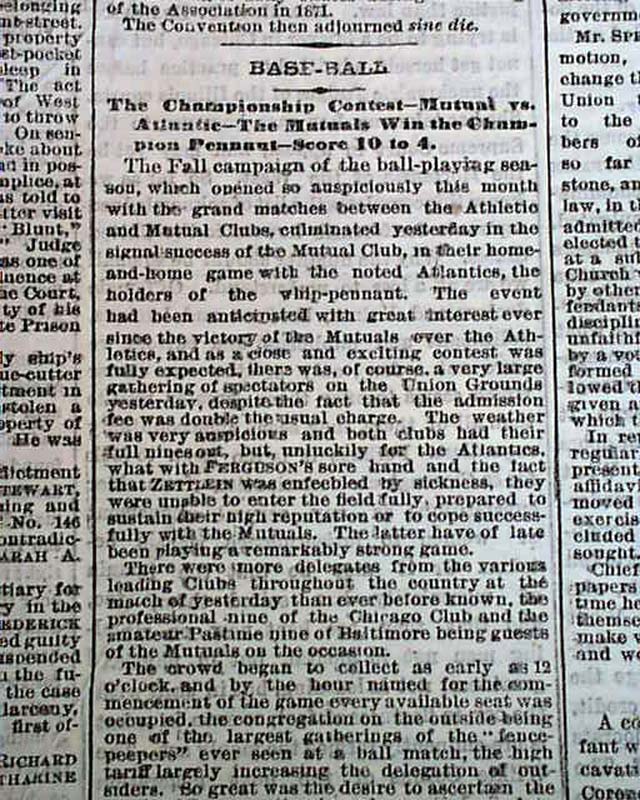 Mutuals win the championship... Each inning telegraphed to other cities....

NEW-YORK TIMES, Sept. 23, 1870  Page 3 has: "The Championship Contest--Mutual vs. Atlantic--The Mutuals Win the Championship Pennant--Score 10-4." It begins: "The Fall campaign of the ball-playing season...culminated yesterday in the signal success of the Mutual Club, in their home-and-home game with the noted Atlantics, the holders of the whip-pennant. The event has been anticipated with great interest...".
As a result of the immense interest in the game: "...the telegraph companies laid a wire to the grounds, and at the close of each inning, the result was telegraphed direct to Cincinnati, St. Louis, Chicago, Boston and New- Orleans."  The game was witnessed by "...a very large gathering of spectators despite the fact that the admission fee was double the charge..." and much more.
A website notes: "The Mutuals win the much-debated championship for 1870 by defeating the Atlantics 10-4 at Union Grounds. The game had such interest that inning by inning results are sent nationwide via telegraph wires. Several clubs would lay claim to the championship that year."
A key date in the history of baseball. Eight pages, nice condition.