Home > Back to Search Results > Death of General Hood? Battle of Chickamauga...
Click image to enlarge 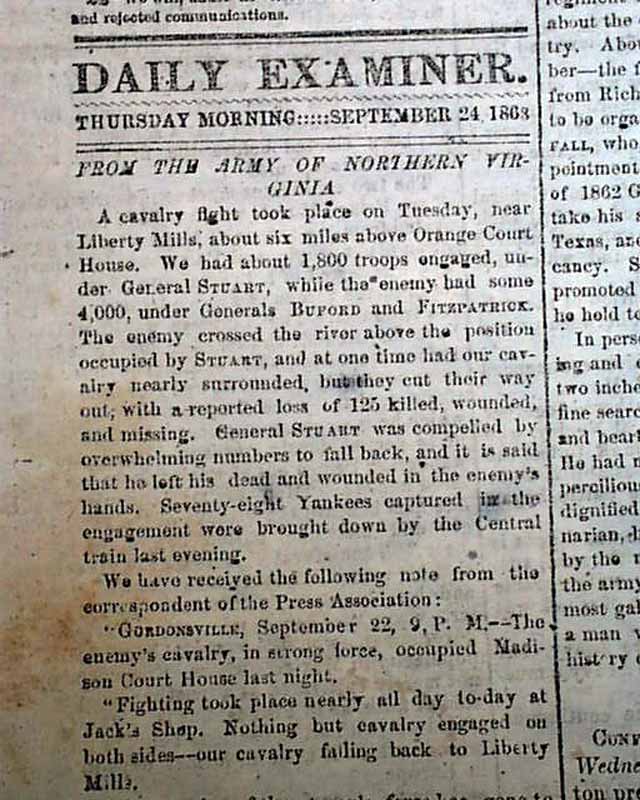 * From the capital of the Confederacy
* Battle of Chickamauga - Georgia

A nice newspaper from the capital of the Confederacy. The front page includes: "From the Army of Northern Virginia" "From City Point--The Flag of Truce" and more. Perhaps the most interesting item is: "The Late Major General Hood" which has much on an untrue event--he died in 1879. The report includes: "The melancholy news of the death of Major-General John B. Hood is fully confirmed by the telegraphic dispatches...He was several wounded during the battle in Tennessee, and died under the amputation of his leg..." followed by much on his life & career. He was injured at Chickamauga & had is leg amputated, but he survived. Note: an irregular bottom margin causes loss to about 5 words here.
The back page has an editorial with talk of the Battle of Chickamauga, plus there is: "Latest Northern News" which has much on the Battle of Chickamauga.
A single sheet issue with a full banner masthead, loss at the bottom margin affects a bit of page 1 text but mostly in 2 ads, nothing on the back page. Otherwise very nice condition.