Home > Back to Search Results > A review of Beethoven's new work, & critical of the waltz...
Click image to enlarge 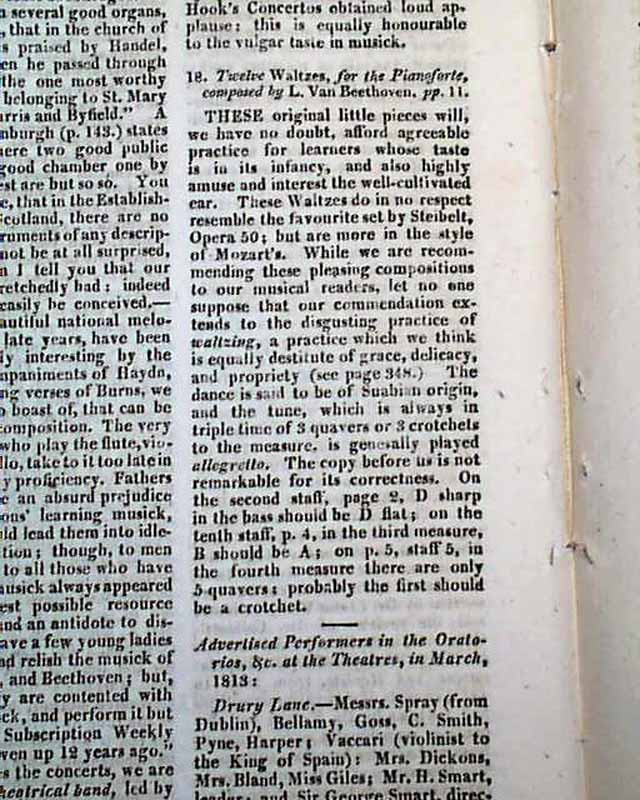 A review of Beethoven's new work, & critical of the waltz...

Under: "Review of New Musical Publications" is: "Twelve Waltzes, for the Pianoforte, composed by L. Van Beethoven." The review includes: "...While we are recommending these pleasing compositions to our musical readers, let no one suppose that our commendation extends to the disgusting practice of waltzing, a practice which we think is equally destitute of grace, delicacy, and propriety...".
It is rare to find period mention of Ludwig van Beethoven in a publication (he died in 1827). Interesting commentary concerning the waltz.
Near the back under "America" is a report concerning Madison's inaugural address, calling it: "...a violent philippic against Great Britain, renewing the old grievances of impressing their seamen, employing the savages in Canada, & our refusing to consider as prisoners of war, and threatening to punish as traitors & deserters persons emigrating from this country to the United States..." with more.
The two plates called for are present.
Complete in 104 pages, full title/contents page featuring an engraving of St. John's Gate, 5 by 8 1/4 inches, slightly close-trimmed at the top portion of the right margin of the title page, very nice condition.