Home > Back to Search Results > Cornwallis surrenders at Yorktown, in an American newspaper...
Click image to enlarge 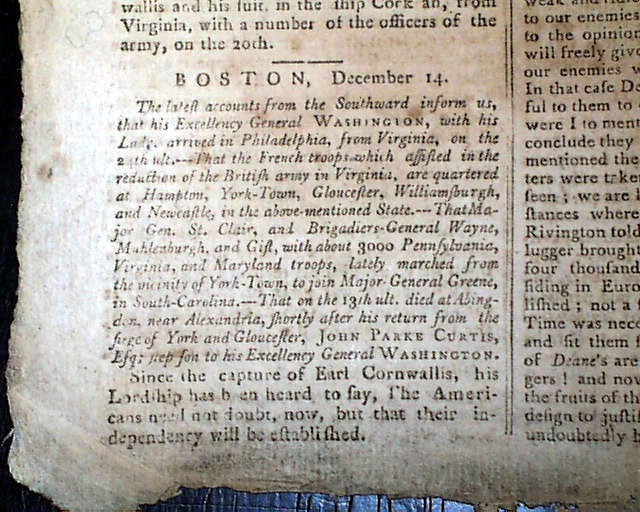 Cornwallis surrenders at Yorktown, in an American newspaper...

This issue contains one of the most historically significant letters from the Revolutionary War, being Cornwallis' official announcement of his surrender to Washington at the Battle of Yorktown.
The report consumes all of page 3, prefaced with: "I am directed to send you the enclosed letter from Lieutenant General Earl Cornwallis, to his Excellency the commander in chief, which you are desired to publish in your next Gazette."
The letter is datelined: "York-Town, in Virginia, October 20, 1781"and begins with the very famous first sentence: "I have the mortification to inform your excellency that I have been forced to give up the posts of York and Gloucester, and to surrender the troops under my command, by capitulation, on the 19th inst. as prisoners of war, to the combined forces of America and France..." with much more. This lengthy letter details the action at the Battle of Yorktown and explains why he had no choice but to surrender. It is signed in type: CORNWALLIS, followed by the numbers of the killed & wounded.
A small item on page 2 mentions, from Boston.: "The latest accounts...inform us that his Excellency General Washington, with his Lady, arrived in Philadelphia, from Virginia...That the French troops which assisted in the reduction of the British army in Virginia, are quartered at Hampton, York-Town, Gloucester, Williamsburgh...about 3000 Pennsylvania, Virginia and Maryland troops lately marched from the vicinity of York-Town to join Major General Greene in South Carolina..." with a bit more, and ends with the very significant statement: "Since the capture of Early Cornwallis, his Lordship has been heard to say, the Americans need not doubt, now, but that their independency will be established."
There are a few other war-related items (some seen in the photos) but all pales in comparison to the historic "mortification" letter from Cornwallis.
We have offered only a few American newspapers with this notable content, this title being several days earlier than most.
A nice feature of the masthead is a great engraving taken after one done earlier by Paul Revere, showing a patriot soldier with a sword in one hand and a scroll reading "Independence" in the other.
Four pages, some damp staining, some light dirtiness and foxing. Never bound nor trimmed (desired) so offered just as sold on the streets.