Home > Back to Search Results > Interment of Abraham Lincoln reported in his hometown newspaper...
Click image to enlarge 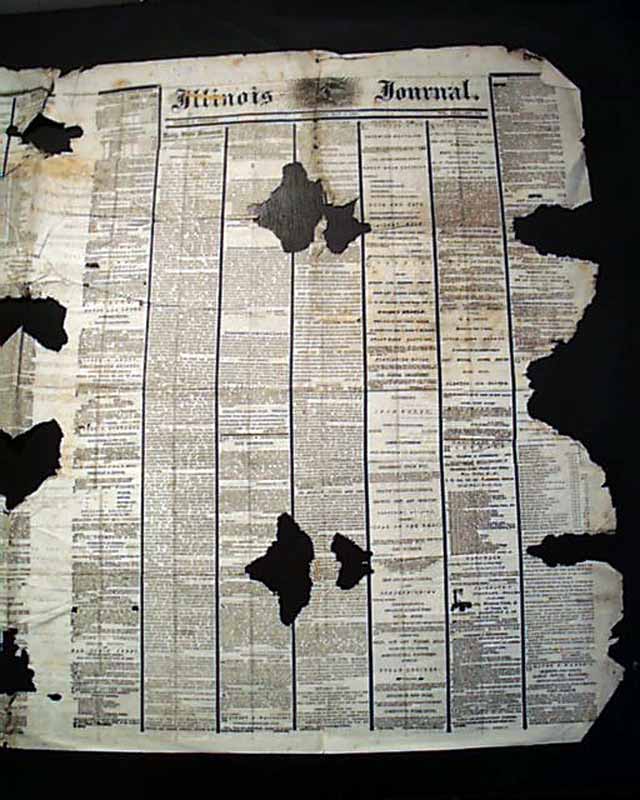 Interment of Abraham Lincoln reported in his hometown newspaper...

Obviously a very damaged newspaper (see photos) however this is a newspaper from Lincoln's hometown, with coverage of his funeral & interment, and from the city where Lincoln was buried.
Although the front page has a few tidbits regarding closing events of the Civil War & the conspiracy trials in Washington, page 2 is where the Lincoln content is found. The top of page 2 has: "Obsequies of President Lincoln" "Military Display" "Vast concourse of People" and more, with the text including: "Yesterday was a marked and eventful day; a solemn landmark in the history of this country & the world...The remains of Abraham Lincoln, the 16th President of the United States, was deposited in the tomb at Oak Ridge Cemetery, near this city, yesterday. The events of Wednesday brought to this city an immense crowd..." with more. Further on is: "...At about 10 o'clock a.m. the coffin was closed & the beloved features were shut out from the people forever..." with much, much more (see photos). But also note that portions of this report are missing due to the damage.
Other articles inside include: "The Removal of President Lincoln's Remains" and "Jeff. Davis to Be Put on Trial For Complicity in the Murder of President Lincoln" "Further Particulars of Wilson's Raid".
If there is any newspaper to own reporting the interment of Lincoln, it would be a Springfield newspaper. Despite the damaged condition, an exceedingly significant issue with a very detailed account of the funeral & burial of Abraham Lincoln.
Complete in four pages, large holes (see) and half of the last column of the back leaf has been cut off.