Home > Back to Search Results > Death of Adolph Hitler in a Nazi newspaper...
Click image to enlarge 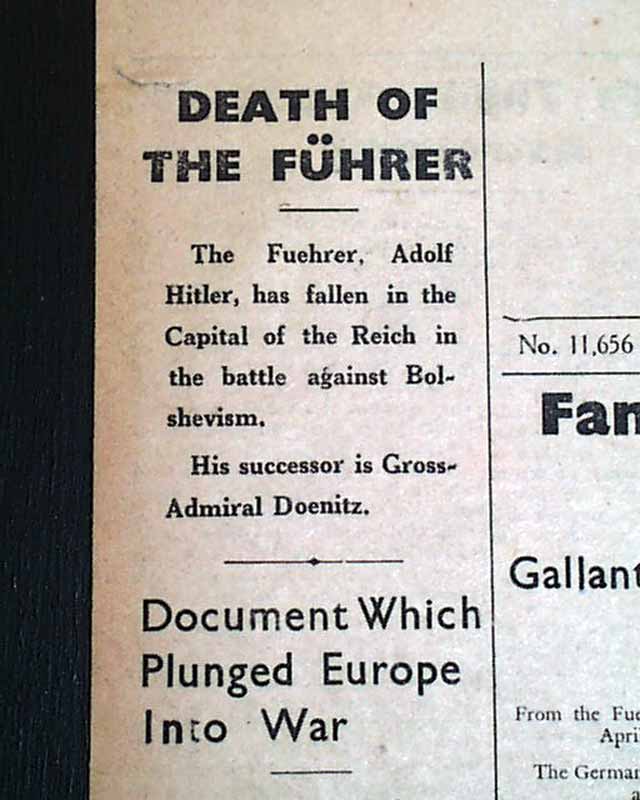 Death of Adolph Hitler in a Nazi newspaper...

This is a terrific newspaper, as this island in the English Channel was under Nazi control during WWII, and as such all the news reports were pro-Nazi although in English, given the residents were English speaking.
This issue carries a very brief & subdued report on the death of Hitler, with a one column head at the top of the ftpg: "Death of The Fuhrer" with the complete report reading just: "The Fuehrer, Adolf Hitler, has fallen in the Capital of the Reich in the battle against Bolshevism. His successor is Gross-Admiral Doenitz.".
The balance of the issue has decidedly pro-Nazi leanings, some almost laughable given the near collapse of the Nazi nation at this point. The largest headline: "Fanatical House-to-House Fighting Rages Day and Night in Berlin" "Gallantry of German Garrison in Face of Bolshevik Onslaughts Which Never Stopped: More U-Boat Successes".
Germany would surrender just 5 days after the publication of this newspaper.
Four pages, 12 by 13 inches, very nice condition.