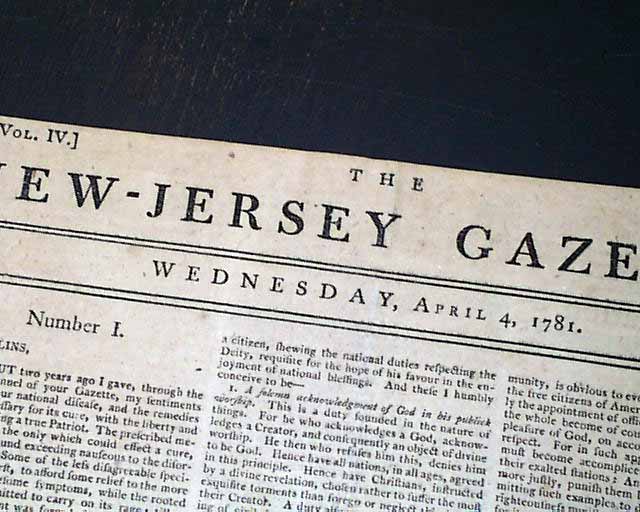 
THE NEW JERSEY GAZETTE, Trenton, April 4, 1781  Titles from New Jersey are very uncommon, particularly from the 18th century. Of greater significance is that this was the very first newspaper in New Jersey, having begun just 3 years prior in 1778.
The entire front page is taken up with a dissertation concerning the role of religion in society, signed in type: "A True Patriot", with one note summing up his thoughts: "...Upon the whole, in viewing the present state of our national affairs, nothing appears so gloomy and alarming as the ungrateful return this people has made, and is making, to a kind and indulgent God..." with much more.
Page 2 has a: "PROCLAMATION" for a day of "...humiliation, fasting & prayer..." signed by the governor: Wil. Livingston. Also on pg. 2: "...that Lord Cornwallis is to have the command in America..." and further on a letter from Halifax, North Carolina, concerning the battle of Guilford Court House noting in part from General Greene's headquarters: "...an engagement was brought on between a small part of our regulars, joined by a very considerable body of militia & most of General Cornwallis's army. The affair opened by Col. Lee early in the morning so as to terminate greatly to the honour & advantage of the American arms..." with more (see). Following this is a letter of March 10, 1781 to General Washington & signed by Nathaniel Greene, concerning military events immediately preceding Guilford Court House.
But it's what follows that is of greatest significance, being over a full column letter to Congress signed by Nathaniel Greene being his report on the historic Battle of Guilford Court House, including the list of killed & wounded & other particulars. The significance of this battle was that although arguably victorious for the British, Cornwallis suffered such severe losses that he decided to abandon his campaign to establish British control over the Carolinas. The last column on pg. 3 has even further details on Guilford Court House.
Four pages, a few very tiny worm holes cause no loss of readability, in truly excellent condition.