Home > Back to Search Results > Creating the state of Israel...
Click image to enlarge 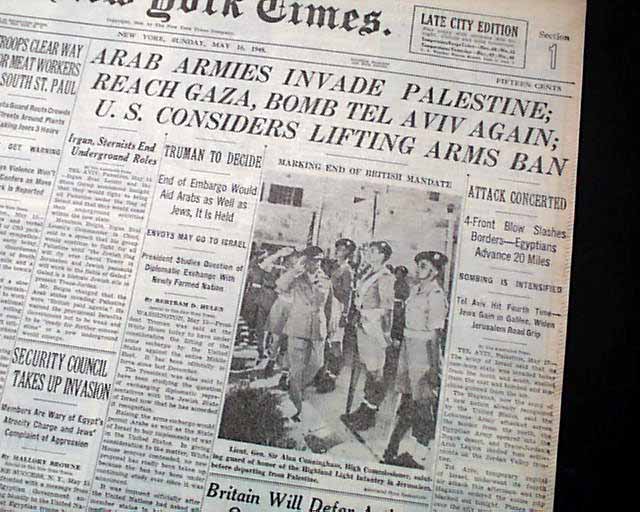 Creating the state of Israel...

The front page features a 5 column, 3 line head: "Arab Armies Invade Palestine; Reach Gaza, Bomb Tel Aviv Again; U.S. Considers Lifting Arms Ban" with related subheads including: "Attack Concerted" "4-Front Blow Slashes Borders--Egyptians Advance 20 Miles" "Bombing Is Intensified" "Tel Aviv Hit Fourth Time--Jews Gain in Galilee, Widen Jerusalem road Grip" "Britain Will Defer Action On Recognition of Israel" "End of Embargo Would Aid Arabs as Well as Jews, It is Held" and more.
There is also a ftpg. photo of Lt. Gen. Sir Alan Cunningham before departing from Palestine.
This is the day after the historic issue of the "Times" which announced the formal creation of the new state of Israel.
The complete issue and being a Sunday paper it has over 100 pages, including the magazine section. This is also the "rag edition" printed on very high quality paper meant for institutional use so the condition is very nice.  Disbound with minor binding residue at the spine margin.