Home > Back to Search Results > John F. Kennedy is the hero on PT 109...
Click image to enlarge 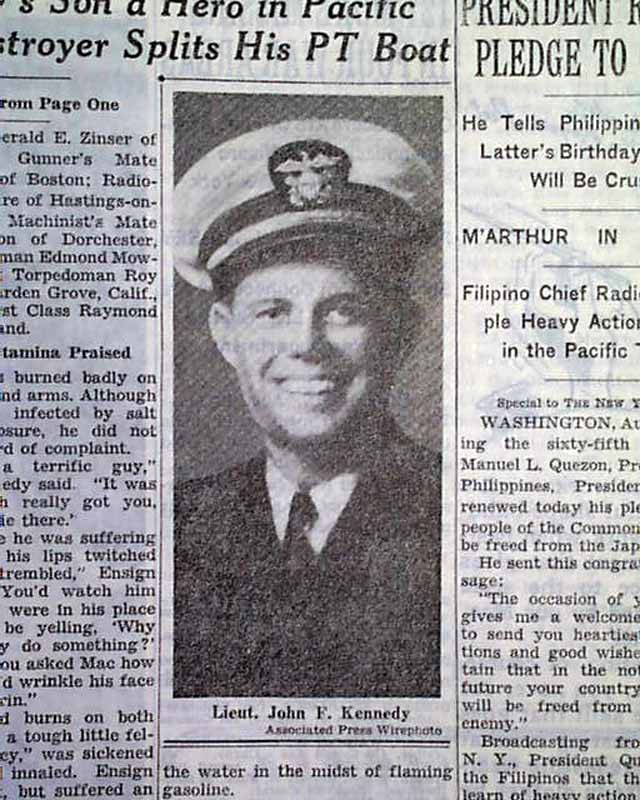 The front page has a two column, two line head: "Kennedy's Son Is Hero in Pacific As Destroyer Splits His PT Boat" with the report carrying over to page 5 where is found a photo of "Lieutenant John F. Kennedy", who was 26 years old at the time. This incident reports the now-famous sinking of his PT boat #109 which he commanded and his heroic actions in saving most of the men in his crew, previously presumed dead. At the time it was his father who was famous, Joseph P. Kennedy, former ambassador to England. Once John F. Kennedy became President this incident became the stuff of legend resulting in a movie and several books, interest being revived in 2002 by the discovery of the PT 109 by famed explorer Robert Ballard who also discovered the wrecks of the Bismarck and Titanic. The article provides considerable detail of the incident and is followed by a brief report headed: "Kennedy's Parents Overjoyed" with a dateline of Hyannis, Massachusetts. I suspect this is one of the few publications to report this particular event as other titles in our inventory do not.
Complete in 30 pages, very nice condition. This is the "rag edition", printed specifically on high-quality newsprint for institutional use by libraries, museums and historical societies.