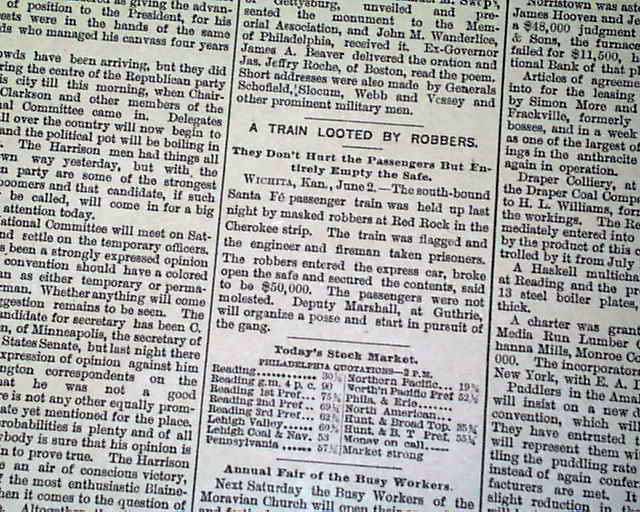 
DAILY TIMES, Bethlehem, Pennsylvania, June 2, 1892  The back page has an item headed: "A Train Looted By Robbers" "They Don't Hurt the Passengers But Entirely Empty the Safe" with the text noting: "...passenger train was held up last night be masked robbers at Red Rock in the Cherokee strip...The robbers entered the express car, broke open the safe & secured the contents said to be $50,000. The passengers were not molested. Deputy Marshall, at Guthrie, will organize a posse and start in pursuit of the gang.'
History tells us the first train the gang passed on because it was dark & they were suspicious something was wrong. So the robbed the next train but netted only about $50. The first train was full of armed guards protecting $70,000.
A nice report the day after it happened.
Four pages, light browning, minor spine wear, otherwise good condition. Should be handled with care.
Note: Since the issue had already been folded at the mid-fold, the folder matched for this issue is sized to store it folded as such.

The Dalton Gang try to outdo the Jame...