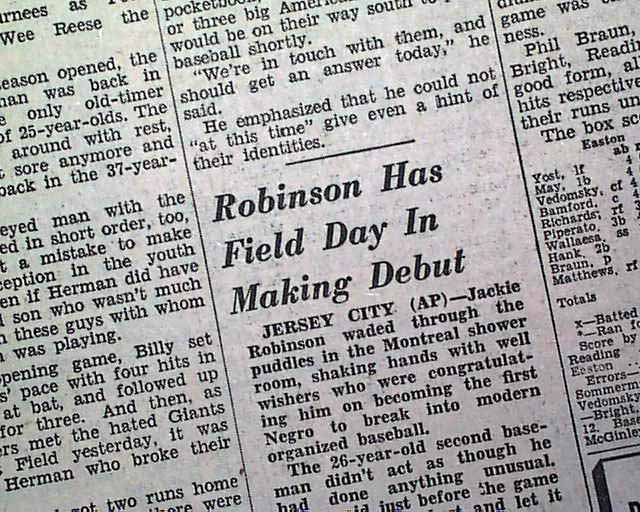 Page 12 has a small one column headline: "Robinson Has Field Day In Making Debut"

See photo for brief but historic coverage on Jackie Robinson breaking the color barrier. A historic report in both baseball and black americana.

wikipedia notes: Jack Roosevelt "Jackie" Robinson (January 31, 1919 – October 24, 1972) became the first African-American major league baseball player of the modern era in 1947.[1] While not the first African American professional baseball player in United States history, his Major League debut with the Brooklyn Dodgers ended approximately eighty years of baseball segregation, also known as the baseball color line. In the United States at this time, many white people believed that blacks and whites should be segregated or kept apart in many phases of life, including sports and daily life. The Baseball Hall of Fame inducted Robinson in 1962 and he was a member of six World Series teams. He earned six consecutive All-Star Game nominations and won several awards during his career. In 1947, Robinson won The Sporting News Rookie of the Year Award and the first Rookie of the Year Award. Two years later, he was awarded the National League MVP Award. In addition to his accomplishments on the field, Jackie Robinson was also a forerunner of the Civil Rights Movement. He was a key figure in the establishment and growth of the Freedom Bank, an African-American owned and controlled entity, in the 1960s. He also wrote a syndicated newspaper column for a number of years, in which he was an outspoken supporter of Martin Luther King Jr. and Malcolm X.

Robinson engaged in political campaigning for a number of politicians, including the Democrat Hubert Humphrey and the Republican Richard Nixon.

In recognition of his accomplishments, Robinson was posthumously awarded a Congressional Gold Medal and the Presidential Medal of Freedom.

On April 15, 1997, the 50 year anniversary of his debut, Major League Baseball retired the number 42, the number Robinson wore, in recognition of his accomplishments both on and off the field in a ceremony at Shea Stadium. In 1950, he was the subject of a film biography, The Jackie Robinson Story, in which he played himself. He became a political activist in his post-playing days.
In 1946, Robinson married Rachel Annetta Isum. In 1973, after Jackie died, Rachel founded the Jackie Robinson Foundation