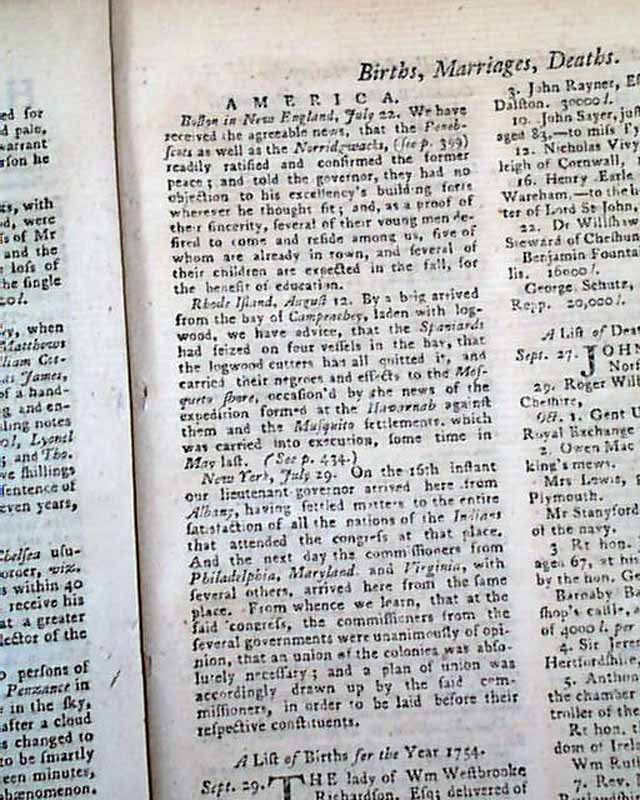 Inside under "America" is a July 29 report from New York about the famous Albany Congress stating that: "...on the 16 instant the lieutenant-governor arrived from Albany ...having settled matters to the entire satisfaction of all the nations of Indians that attended the congress at that place."
It further states that commissioners from Philadelphia, Maryland and Virginia arrived the next and that: "...at the...congress, the commissioners from ...several governments were unanimously of opinion, that an union of the colonies was absolutely necessary; and a plan of union was...drawn up by the...commissioners...to be laid before their respective constituents."
This plan for a union of all the American English colonies, better known as the Plan of The Union, was proposed by Benjamin Franklin, one of the delegates at the Congress. The union would consist of a president general and would include a grand council with legislative powers elected by the individual colonial assemblies. The plan was later rejected by the colonial assemblies.
Both plates called for are present.
Complete in 44 pages, 5 3/4 by 8 3/4 inches, wide, never-trimmed margins, full title/contents page featuring an engraving of St. Johns Gate, great condition.