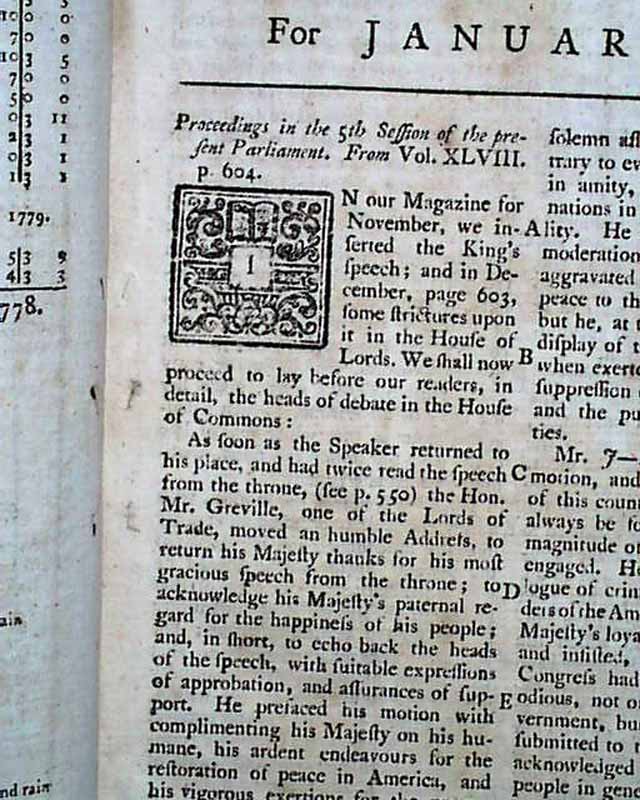 THE GENTLEMAN'S MAGAZINE, London, January, 1779  The first article: "Summary of Proceedings in the Present Parliament" takes ten pages and includes much talk of the on-going Revolutionary War, bits including: "...He enumerated a black catalogue of crimes committed by the leaders of the American rebellion against his Majesty's loyal subjects in that country..." and further on: "...he took occasion to lament the melancholy fate of those brave men who laid down their arms at Saratoga, languishing, he said, under the power of a set of men who have violated every idea of public faith..." and too much more to mention here.
There is an article on the speech of a judge passing sentence of high treason on John Roberts. The report begins: "John Roberts, you have been indicted, and, after a very long, a very fair, & impartial trial, been convicted of High Treason..." and ends with: "...You shall be taken back to the place from whence you came & from thence to the place of execution & there to be hanged by the neck until dead. May God be merciful to your soul!"
The internet provides considering reporting on this treason case of John Roberts, victims of a politically motivated sentence for treason.
Near the back is the "Historical Chronicle" which includes under: "American News": "John Roberts and Abraham Carlisle, two Quakers, were executed at Philadelphia, being convicted, it is said, of carrying on a treasonable correspondence with the enemies of the United States."
Lacking the one plate called for.
Complete in 48 pages, 5 by 8 1/2 inches with a full title/contents page featuring an engraving of St. John's Gate. Several of the first pages are close-trimmed with some loss of text. Stray handwriting on the front cover.