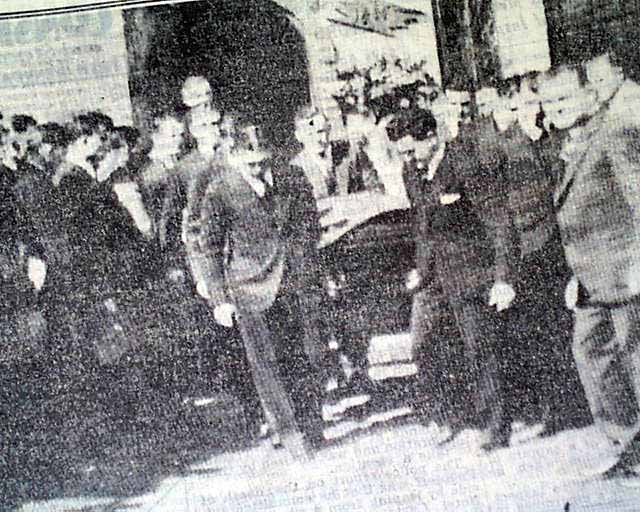 This 70+ page newspaper has one column headlines on the front page that include: "ROCKNE LAID TO REST; THOUSANDS AT GRAVE" "Body of Notre Dame's Famous Coach Buried at South Bend With Simple Ceremonies" and more. (see) 1st report on his final burial.

wikipedia notes: Rockne was only 43 when he died in a plane crash in Kansas on March 31, 1931, while en route to participate in the production of the film The Spirit of Notre Dame. Shortly after taking off from Kansas City, where he had stopped to visit his two sons, Bill and Knute Jr., who were in boarding school there at the Pembroke-Country Day School, one of the Fokker Trimotor aircraft's wings separated in flight. The plane crashed into a wheat field near Bazaar, Kansas, killing eight people, including Rockne. President Herbert Hoover called Rockne's death "a national loss."

Authorities and aviation journalists at first speculated that the plane came apart after penetrating a thunderstorm and experiencing strong turbulence and icing, which, it was suspected, blocked the venturi tube that provided suction to drive the flight instruments. That was thought to have resulted in a graveyard spiral under instrument flight conditions and structural failure from excessive load. But this hypothesis was not backed up by meteorological records and observations; there was no isolated thunderstorm cell or other notable buildup in the area. Also, the failure involved the sturdy wing, not the tail surfaces. A long, thorough and well-publicized investigation concluded that the Fokker, operated by a company of the newly-formed TWA, broke up in clear weather due to fatigue cracks in its famous cantilever stressed plywood wing, around where one of the engine mounting struts joined.

The Fokker Super Universal fleet was inspected and grounded after similar cracks were found in many examples, ruining the manufacturer's American reputation (the Dutch designer Anthony Fokker was then in business in Hasbrouck Heights, New Jersey). This resulted in a complete overhaul of standards for new transport aircraft and led to the use of all-metal construction in commercial aircraft such as the Boeing 247 and Douglas DC-2. The Rockne crash dominated the news for a while and was thus a tragic catalyst in the progress of civil aviation.

On the spot where the plane crashed, a memorial dedicated to the victims stands surrounded by a wire fence with wooden posts. The memorial was maintained for many years by James Easter Heathman, who, at age thirteen in 1931, was one of the first people to arrive at the site of the tragedy.[8] In 2006, he was given an honorary monogram by the University of Notre Dame for his dedication to remembering the life of Rockne.[8] Mr. Heathman passed away on January 29, 2008, at age 90 following a bout with pneumonia.

Rockne was buried in Highland Cemetery in South Bend, and a student gymnasium building on campus is named in his honor, as well as a street in South Bend, and a travel plaza on the Indiana Toll Road. In addition to these tributes, the town of Rockne, Texas was named to honor him. The Matfield Green travel plaza on the Kansas Turnpike, near Bazaar, contains a memorial to him.