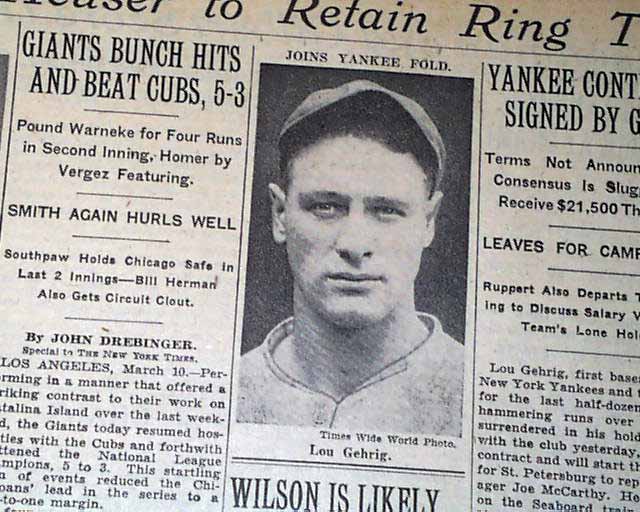 A nice three column headline on the front page has: "123 KILLED BY EARTHQUAKE IN SOUTH CALIFORNIA CITIES; 4,150 ARE REPORTED INJURED" with many subheads and related map (see photos). Much more on page 10 & 11.
Page 19 has one column headlines on page 19 that include: "YANKEE CONTRACT SIGNED BY GEHRIG", "Terms Not Announced, but Consensus Is Slugger Will Receive $21,500 This Year", "Leaves For Camp Today" and more with one column photo of Gehrig (see photos). Great to have in this New York City title.
Other news of the day throughout. Paper is in nice condition.

wikipedia notes: The Long Beach earthquake of 1933 took place on March 10, 1933 at 17:55 PST (March 11, 01:55 UTC), with a magnitude of 6.4, causing widespread damage to buildings throughout Southern California. The epicenter was offshore, southeast of Long Beach on the Newport-Inglewood Fault. Forty million dollars property damage resulted, and 115 lives were lost. Many of these fatalities occurred as people ran out of buildings and were hit by falling debris.

The major damage occurred in the thickly settled district from Long Beach to the industrial section south of Los Angeles, where unfavorable geological conditions (made land, water-soaked alluvium) combined with poor structural work to increase the damage. At Long Beach, buildings collapsed, tanks fell through roofs, and houses displaced on foundations. School buildings were among those structures most generally and severely damaged.

The earthquake struck during the filming of the comedy International House (1933), and film exists of the quake striking the soundstage during shooting.

The earthquake also interrupted filming of "The Shadow Waltz," a musical scene in Gold Diggers of 1933, nearly throwing choreographer Busby Berkeley from a camera boom, and rattling dancers on a 30-foot (9.1 m)-high platform.