Home > Back to Search Results > Vilifying the Yankees...
Click image to enlarge 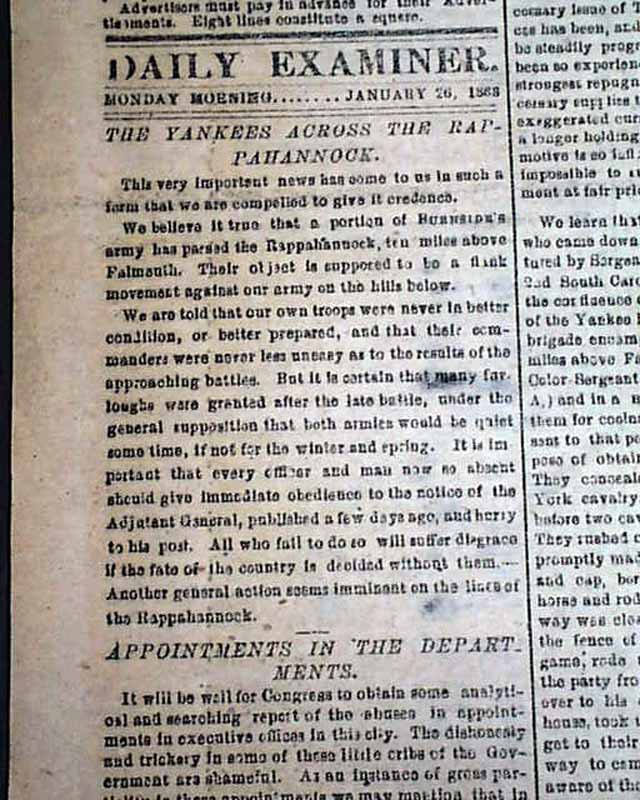 A nice single sheet issue (typical late in the war) with a full masthead, with front page reports headed: "The Yankees Across the Rappahannock" "Appointments In the Department" "The Nautical Jeffreys" "Our Military Resources with several subheads: "Latest News From the North with subheads including: "The Capture of Arkansas Post--The Fight at Vicksburg--Federal Loss--Affairs in the Southwest--The Yankee Congress...". Also a full column headed: "Latest News From the North--Active Operations Resumed at Fredericksburg--Advance of Burnside's Army--the Yankees Recross the River...". Plus small heads: "Confederate States Prison Items" "More Aid for the Fredericksburg Sufferers" and more.
The back page has an editorial taking nearly two columns, a portion of which includes: "The custom of denouncing the Yankees is becoming common.. Under the soft influences of a serenade, President Davis likens them to hyenas; Gov. Letcher...insists that they are a heaven-defying, hell-deserving race, and pleasantly consigns their chief magistrate, Abe Lincoln, to a doom more fearful than that of Devergoil...The practice of vilifying the Yankees has gotten into the newspapers..." with much more interesting reading. Also on the bkpg: "Notes Of The War--General Wheeler's Raid in the Rear of Rosecrans' Army--Capture of Immense Booty & a Terrible Smash UP of the Enemy's Supplies..." and: "An Irish View of Mr. Lincoln & the War" and more.
Folio size, single sheet, nice condition.