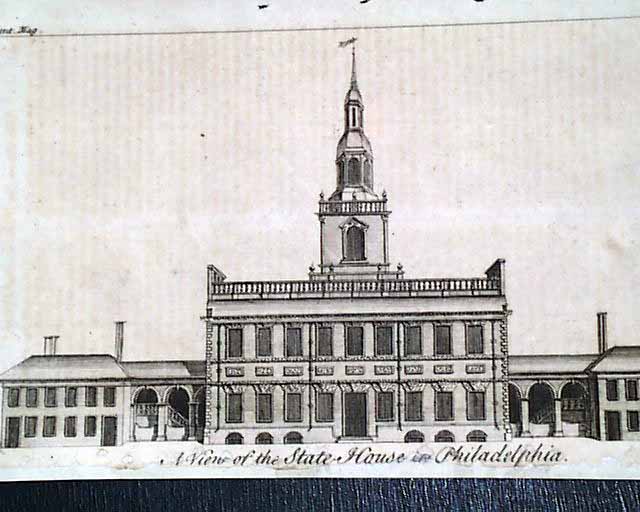 Despite the 48 pages of text within this issue the prime content is certainly the full page plate captioned: "A View of the State House in Philadelphia" which would later be known as Independence Hall.
This is a print of this famous building 24 years before it would become much more famous.
This is one of the earliest prints of this historic building to be had & is quite rare as it is typically missing from this issue. The print has a repair to the bottom margin, just touching some of the caption but not touching the image of the State House. Otherwise in very nice condition.
Other items of interest in this issue as noted in the table of content include: "Spruce Beer, how made in North America" "Account of the Acts concerning Coroners" "Piety of Mahometans" "Hydrophobia cured by Excessive Bleeding" and a news report from "Charles Town [Charleston] South Carolina".
This issue is complete with all plates, including a nearly full page print of "The Parrot of Carolina, from Catesby's Natural History" which is water-colored; "20 Baronets' Arms", and a print of "An Antique Representation of Mars".
Complete in 48 pages, full title/contents page, 5 by 8 inches. Minor & small binding holes at the blank spine & two inked library stamps in lower margins of interior pages.