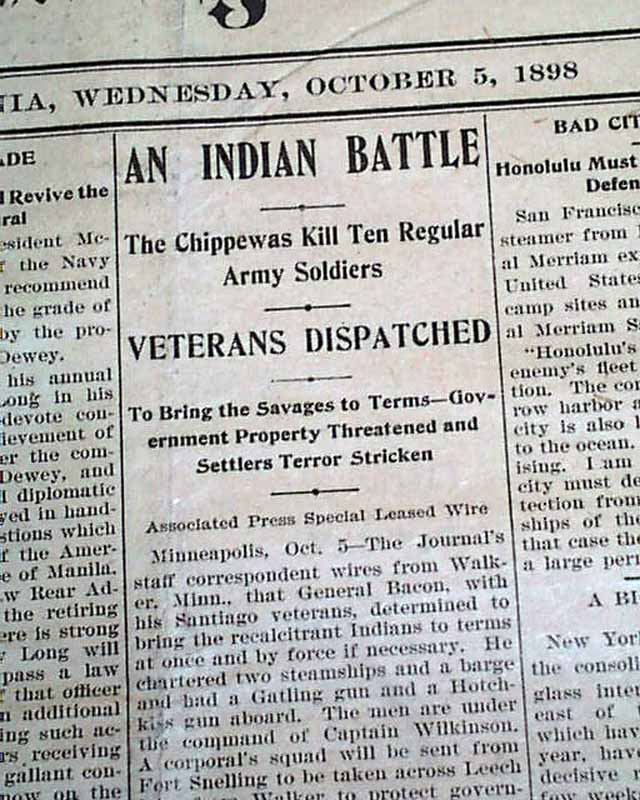 The top of the front page has a one column heading: "AN INDIAN BATTLE" with subheads. (see) Surprisingly this issue is in good condition being from the "wood pulp" era. Very hard to find issues that are not totally fragile from this era in paper.
Complete with 4 pages, 23 x 19 1/2 inches, a few small library stamps within the masthead, a few small binding holes along the spine, generally nice.

wikipedia notes: The Battle of Sugar Point, or the Battle of Leech Lake, was fought on October 5, 1898 between the 3rd U.S. Infantry and members of the Pillager Band of Chippewa Indians in a failed attempt to apprehend Pillager Ojibwe Bugonaygeshig ("Old Bug" or "Hole-In-The-Day"), as the result of a dispute with Indian Service officials on the Leech Lake Reservation in Cass County, Minnesota.
Often referred to as "the last Indian Uprising in the United States", the engagement was also the first battle to be fought in the area of the United States known as the Old Northwest since the Black Hawk War in 1832. It is sometimes considered[who?] to be the last battle fought between Native Americans and the U.S. Army.