Home > Back to Search Results > This racist newspaper reports the Lincoln assassination...
Click image to enlarge 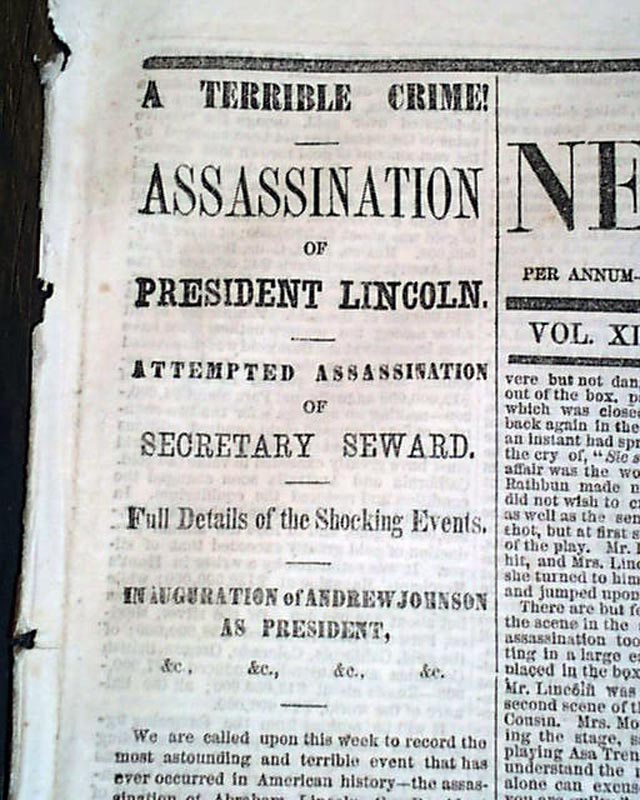 A decidedly racist newspaper which began well before the Civil War & lasted a few years after. As such their reporting on war events provide a contrasting perspective beyond most other Northern newspapers.
With this issue all factious leanings and biased commentary is set aside to report the assassination of Abraham Lincoln. The entire front page reports--with considerable detail--the tragedy of the era with first column heads: "A Terrible Crime!" "ASSASSINATION of PRESIDENT LINCOLN" "Attempted Assassination of Secretary Seward" "Full Details of the Shocking Events" "Inauguration of Andrew Johnson As President".
The reporting is considerable, an advantage of a weekly newspaper, consuming the front page with carry-over reports inside.
Inside has: "Sketch of John Wilkes Booth" "The Death of The President t" being a lengthy editorial; "Deliberate Preparations Fo rthe Murder" "The Funeral Solemnities" "Inauguration of President Johnson" and more as seen in the photos.
Interesting to have these reports in this pro-South newspaper.
Eight pages, very nice condition.