Home > Back to Search Results > Prelude to the Battle of the Alamo...
Click image to enlarge 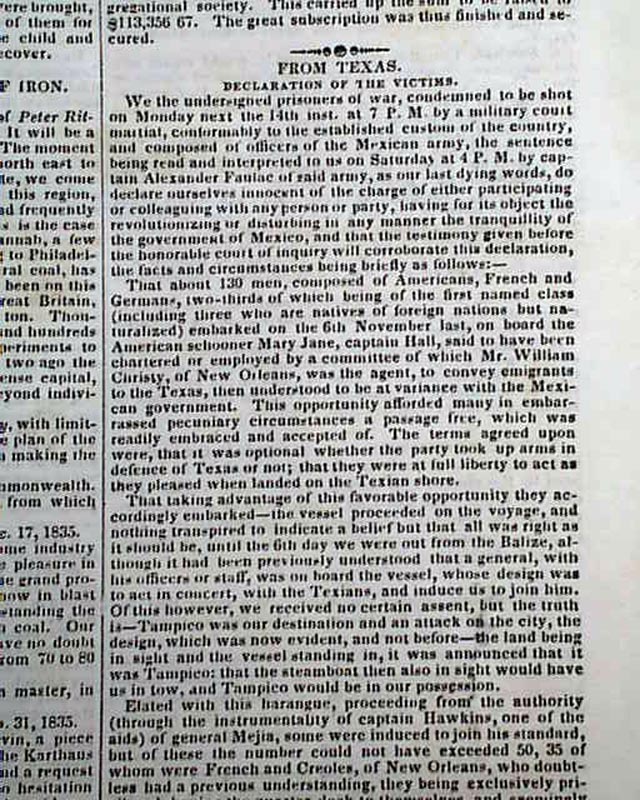 Prelude to the Battle of the Alamo...

This issue has a great deal of reporting: "From Texas" giving the latest information on their struggles during this significant year, the first report with a subhead: "Declaration of the Victims" beginning: "We the undersigned prisoners of war, condemned to be shot on Monday next..." and more taking over a full column.
This is followed by a report from New Orleans which begins: "St. Antonio, the last fortress of the despot Santa Anna, in Texas, has fallen!!...On the Saturday previous, 300 of the colonial troops entered the town of San Antonio....Here they remained battling...until...the 9th when they forced their way into the square and drove the enemy across the river into their fort called the Alamo...the battle continued until Thursday 10th when the enemy capitulated. By the capitulation upwards of 1000 yielded to less than 300. The town itself was surrendered with 24 pieces of brass artillery...This glorious conquest was achieved with a loss on the part of the conquerors of only 3 killed & 30 wounded..." with more.
These were more pleasant days when the Texans were victorious in removing the Mexicans from San Antonio, but the tide would turn in a few months with the memorable "Battle of the Alamo".
Sixteen pages, 6 1/4 by 10 inches, nice condition.