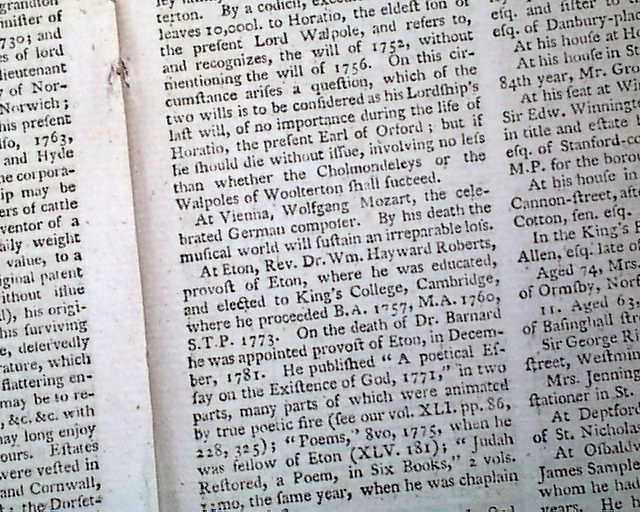 
THE GENTLEMAN'S MAGAZINE, London, December, 1791  Presented inconspicuously among other death reports is a brief yet very notable report on the death of Wolfgang Amadeus Mozart, ending with a prophetic comment:  " At Vienna, Wolfgang Mozart, the celebrated German composer. By his death the musical world will sustain an irreparable loss."
He died on December 5 making this a very timely report.
Also of curious interest is a report mentioning the finding of a stone pipe presented to William Penn by the Indians, as well as the text of the: "Epitaph On a Tomb-stone...To the memory of the venerable John Wesley...", the Father of Methodism who died in March of 1791. There is also a report of slaves revolting in Haiti.
Included are three full page plates, one of which shows the cathedral in Bristol, England, with ships in the foreground.
Complete in 96 pages, 5 by 8 1/4 inches full title/contents page which features an engraving of St. John's Gate, great condition.