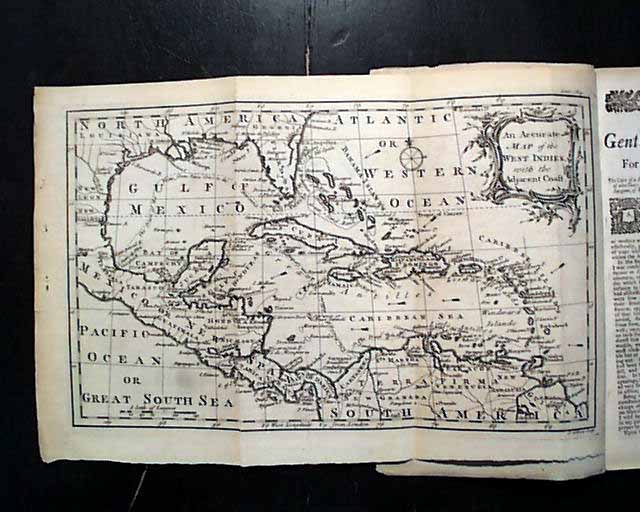 Item # 680044 THE GENTLEMAN'S MAGAZINE, London, February, 1762  Certainly the prime feature of this early magazine is the terrific & very displayable foldout map titled: "An Accurate Map of the West Indies with the Adjacent Coast" as noted in the ornate cartouche. This map shows much of present-day Georgia & Florida to present-day Texas, with all of Central America and all of the Caribbean Ocean, plus northern South America. It includes the many islands of the Caribbean, each labeled, and is in uncommonly  terrific condition. The map measures 8 1/4 by 12 inches and is darkly inked (see).
Articles noted in the table of contents include: "A Present to the Society of Ghostmongers" "The Notion of Ghosts & Apparitions Seriously Considered" "Early Method of Recruiting the Navy & Army"  "Declaration of War by Spain" & more.
The mentioned map is the only plate called for in this issue.
Complete in 48 pages, measures 5 1/2 by 8 3/4 inches with wide untrimmed margins, full title/contents page & engraving of St. John's Gate, great condition.