Home > Back to Search Results > Fall of Richmond, the capital of the Confederacy...
Click image to enlarge 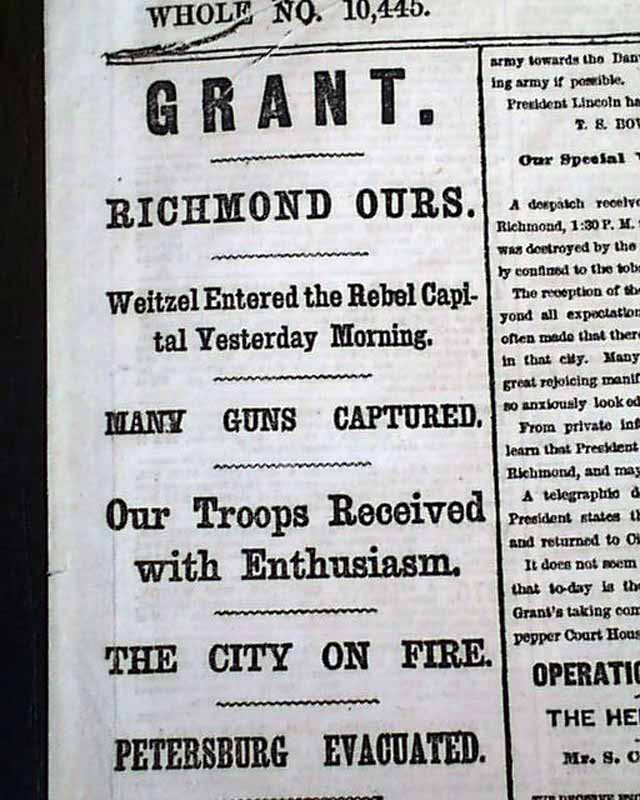 Fall of Richmond, the capital of the Confederacy...

First column heads on the front page about the fall of Richmond: "GRANT" "Richmond Ours" "Weitzel Entered the Rebel Capital Yesterday Morning" "Many Guns Captured" "Our Troops Received with Enthusiasm" "The City On Fire" "Petersburg Evacuated" "Lee and His Army in Full Flight" "Grant In Pursuit to Cut off His Retreat" "Interesting Details of the Fighting on Saturday" Sheridan's Victory Near Dinwiddie the Turning Point of the Day" "Two four-Gun Batteries, 5000 Prisoners, Including Ransoms and Stuarts Brigades Complete Pickett's Division Train, and a Large Number of Small Arms and Accoutrements Captured" "Wright, with the Sixth Corps, Pierces the Enemy's Lines and Attacks Him in the Rear" "The Casualties" & more.
Eight pages, never bound nor trimmed. There is wear at the central fold with archival repairs to the same on page 2, minor loss of text. Also the lower right portion of the back leaf (mostly ads) is present in photocopy. As such a 2nd rate issue & priced at a fraction of a nice issue.