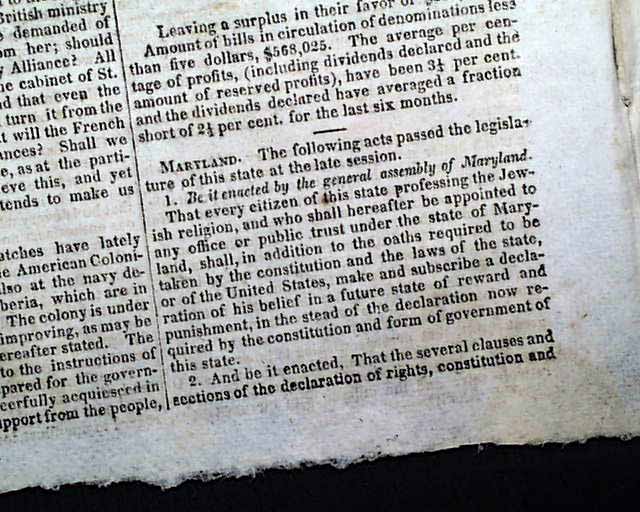 
THE WEEKLY REGISTER, Baltimore, March 19, 1825  The prime content in this issue is the page 2 report from "Maryland" noting three acts which have passed the legislature, the first & most significant being the Jew Bill, which for many years had been attempted before finally being approved in 1825. The text of the bill includes: "Be it enacted by the general assembly of Maryland, that every citizen of this state professing the Jewish religion, and who shall hereafter be appointed to any office or public trust under the state of Maryland, shall...make & subscribe a declaration of his belief in a future state of reward & punishment, in the stead of the declaration now required by the constitution..." with a bit more.
This was a very significant development in the advancement of Jewish equality within the United States.
Another article in this issue has a small head: "The Israelites" with the text beginning: "The pope has lately issued an edict for the conversation of the Jews of which the following is an extract..." and see the photos for the remainder of this article.
The back page has a small item concerning the Santa Fe Trail, headed: "Intercourse with Santa Fe" with the text including: "...a company, to be composed of 100 men...prepared to go out to the city of Santa Fe...in the province of Texas for the purpose of selling goods to the inhabitants."
Complete in 16 pages, 6 1/2 by 10 inches, nice condition.