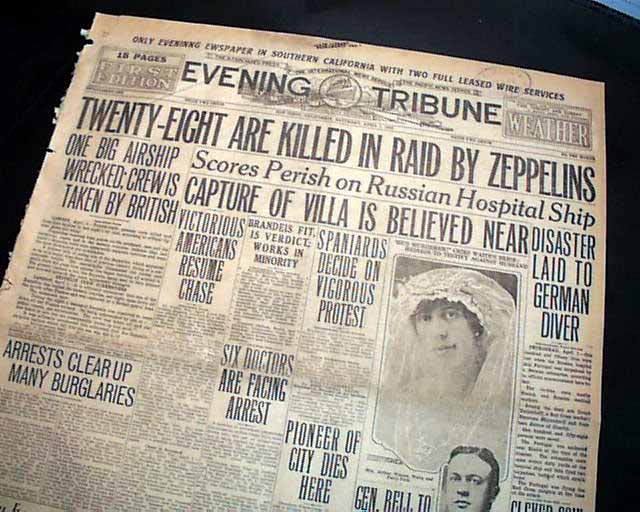 The front page has a nice banner headline: "TWENTY-EIGHT ARE KILLED IN RAID BY ZEPPELINS" with subhead. (see) Nice for display. Surprisingly this issue is in good condition being from the "wood pulp" era. Very hard to find issues that are not totally fragile from this era in paper. Rare as such.
Complete with 18 pages, small library stamp within the masthead, a little irregular along the spine, generally very nice.

wikipedia notes: On 30 March – 1 April ten airships set off to bomb eastern England and London. Most turned back because of mechanical problems or the weather; L 15 was intercepted by Claude Ridley, who was unable to do more than fire a few rounds at extreme range; it was then damaged by anti-aircraft fire over Purfleet before being attacked by Alfred de Bathe Brandon using Ranken darts. It came down in the sea near Margate, all but one of the crew surviving. Most of the 48 killed in the raid were victims of a single bomb which fell on an Army billet in Cleethorpes.