Home > Back to Search Results > Maritime reports from America... A death report on the Great Plague...
Click image to enlarge 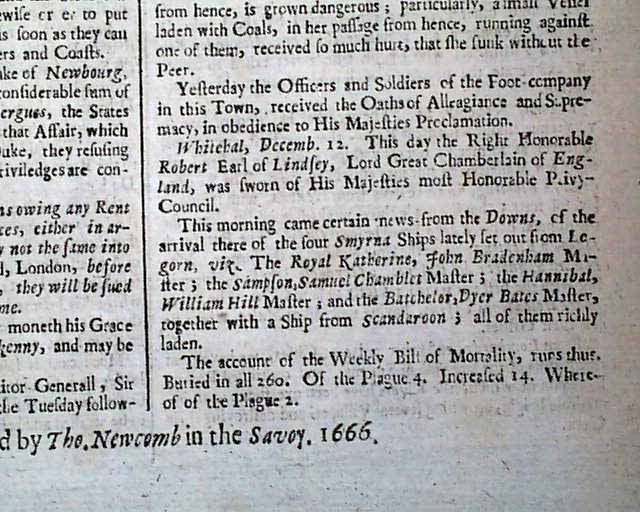 Maritime reports from America... A death report on the Great Plague...

The back page has maritime reports from the "new world" with: "Some vessels arriving lately...from Virginia inform us that by a ship from Jamaica, they were advised that several of the Caribee fleet, separated by the hurricane & supposed to be lost, were put into Jamaica, but give no account of the Lord Willoughby, which increases our fears for him...that a great advance of their manufactures of silk, flax and hemp in Virginia where the inhabitants in testimony of their gratitude to his Majesty for his great care in encouraging the interest of that country, have made him a considerable present in their own silks. The inhabitants likewise of Maryland and Carolina, encouraged by the probable advantages of their neighbors' trade, begin to neglect their own in tobacco & apply themselves to these new manufactures."
At the bottom of the back page is a notable report on the weekly Plague deaths: "The account of the Weekly bill of mortality, runs thus. Buried in all 260. Of the Plague 4. Increased 14. Whereof of the Plague 2."
Complete as a single sheet newspaper, 7 by 11 inches, great condition.