Home > Back to Search Results > Life in the Wild West...
Click image to enlarge 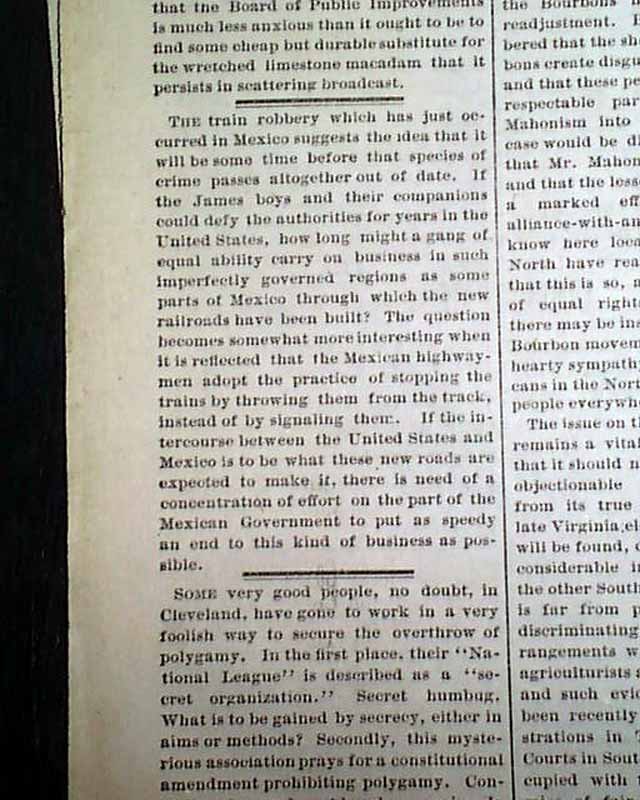 
ST. LOUIS GLOBE-DEMOCRAT, Nov. 16, 1883  Likely due to its location on the edge of the Western frontier, this newspaper typically contained a wealth sensational crime reports and events from the West, much more than any found in eastern newspapers.
Page 7 begins with: "AT THE STAKE" "A Colorado Ranchman Tortured by a Band of Robbers" "The Victims Burned & Bastinadoed in the Effort to Discover His Hidden Wealth". Other reports on pg. 7 area headed: "Two Members of the Bass Gang" "Mormons Alarmed" "The Mexican Train Robbery" "Plundering a Church" "Shot While Resisting Arrest" "The Allen Murder" and even more crime.
Page 6 has most of a column headed: "ABE BUZZARD" "The Pennsylvania Bandit at Large in the Mountains" "All Attempts to Effect His Capture Prove Ineffectual--Interview with the Outlaw's Bride". One website on Buzzard begins: "A hoodlum or ne'er-do-well might search long and hard for a name more suitable than Abe Buzzard...".
An editorial item mentions: "The train robbery...suggest the idea that it will be some time before that species of crime passes altogether out of date. If the James boys & their companions could defy the authorities for years..." with more.
The complete issue, good condition.