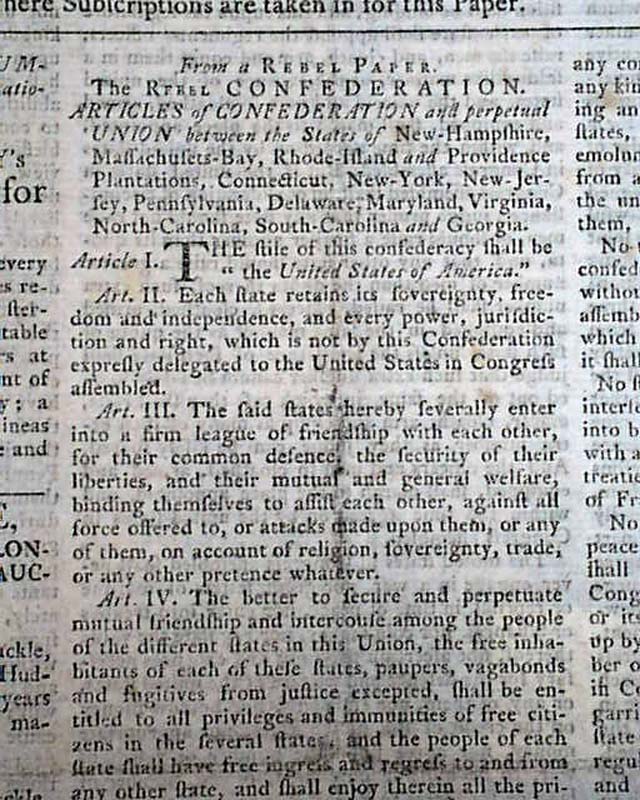 
THE PENNSYLVANIA LEDGER OR THE PHILADELPHIA MARKET-DAY ADVERTISER, March 11, 1778  This was a strongly Tory newspaper which began in 1775 and closed shop in May of 1778 when the British evacuated Philadelphia.
There are only a handful of documents in American history which can be considered cornerstones in the creation of our national government, which would include the Declaration of Independence, the Articles of Confederation, and the Constitution among a few others as well.
This issue contains on the front page and page 2 the complete printing of one of these, headed at the top of the middle column on the front page: "From A Rebel Paper. The Rebel CONFEDERATION" "ARTICLES of CONFEDERATION and Perpetual UNION between the States of New-Hampshire, Massachusetts-Bay, Rhode-Island and Providence Plantations, Connecticut, New-York, New-Jersey, Pennsylvania, Delaware, Maryland, Virginia, North-Carolina, South-Carolina and Georgia."
What follows are all thirteen articles of this document following which is a note signed by Henry Laurens, President of Congress, reading: "These articles shall be proposed to the legislatures of all the united states, to be considered, and if approved of by them, they are advised to authorize their delegates to ratify the same in the Congress of the united states; which being done, the same shall become conclusive."
This was the first governing document, or constitution, of the United States. The Articles were created in 1777 by the representatives of the states in the Continental Congress out of a perceived need to have "...a plan of confederacy for securing the freedom, sovereignty, and independence of the United States." Ten years later it would be replaced by the Constitution which exists to this day.
Additionally, page 2 contains a nice letter signed in type: G. Washington, Head-Quarters, Valley-Forge, Feb. 27, 1778" (see photos for the full text) which related Washington's hope for a optimistic campaign in the spring & the need for supplies.
The back page has an: "Extract of a Letter from General Sir William Howe to Lord George Germain, dated Philadelphia, Oct. 21, 1777" which takes  nearly half a column. This is followed by a letter from General Clinton to General Howe from Kingsbridge, Sept. 23, 1777, which concludes in a Supplement issue not present with this issue.
Four pages, light damp stain to a lower corner, a few numeric notations in margins next to ads (this was the editor's copy), generally in very nice condition.
A cornerstone issue for any Americana collection. 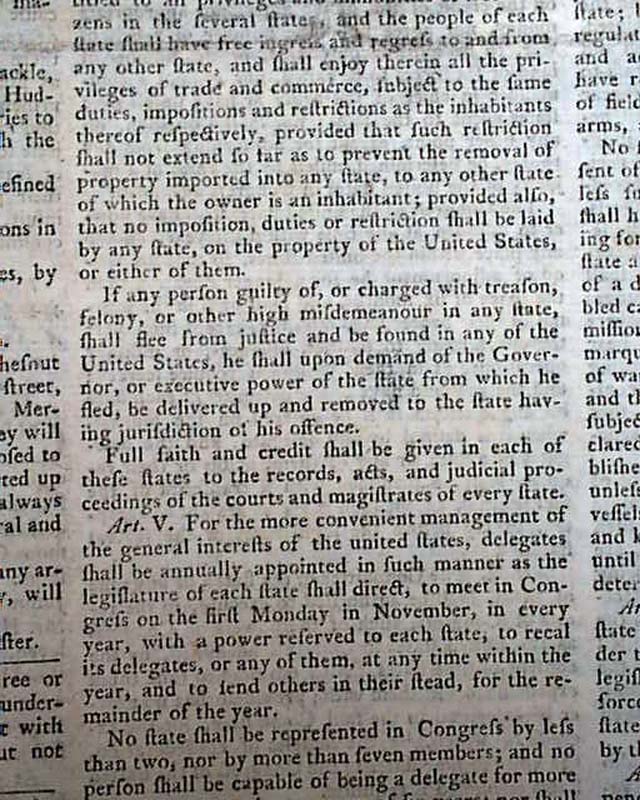 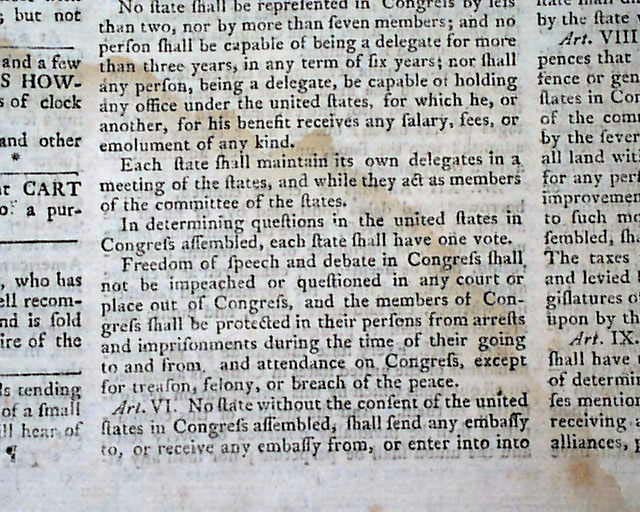 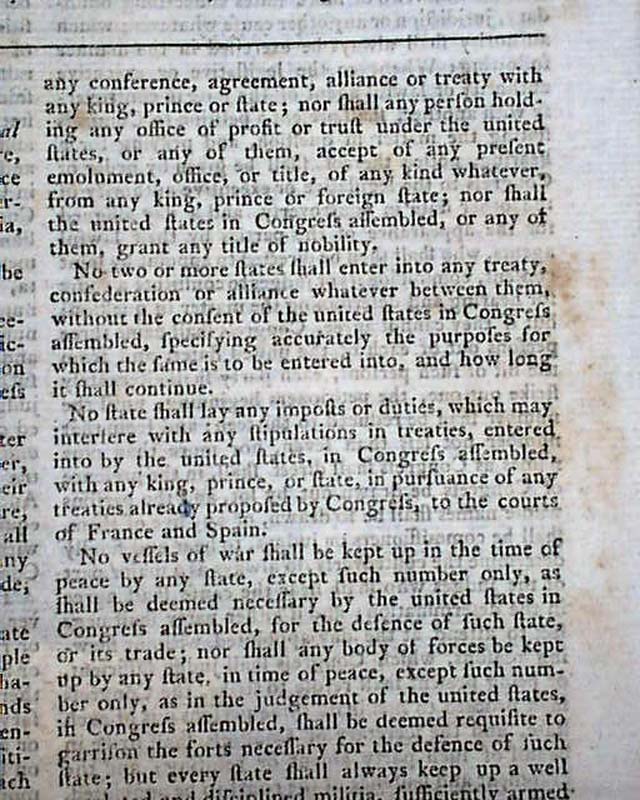 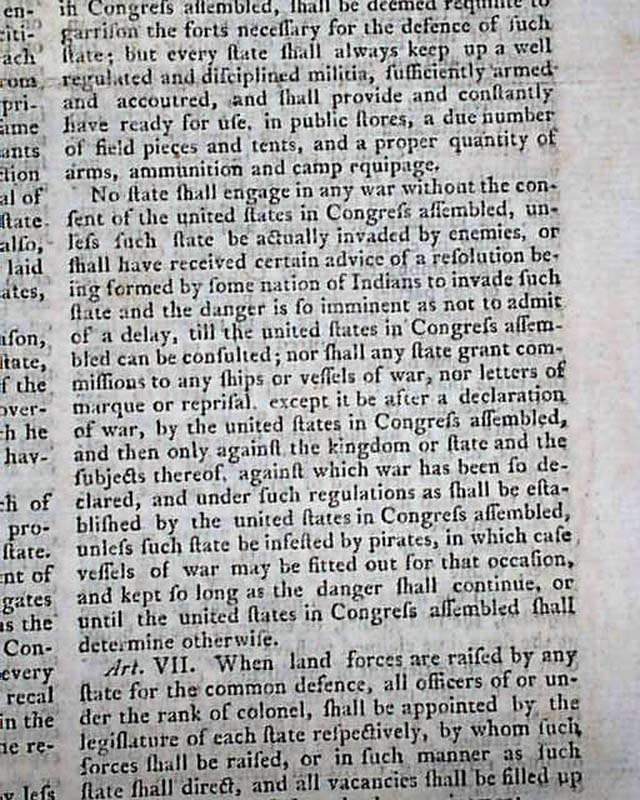 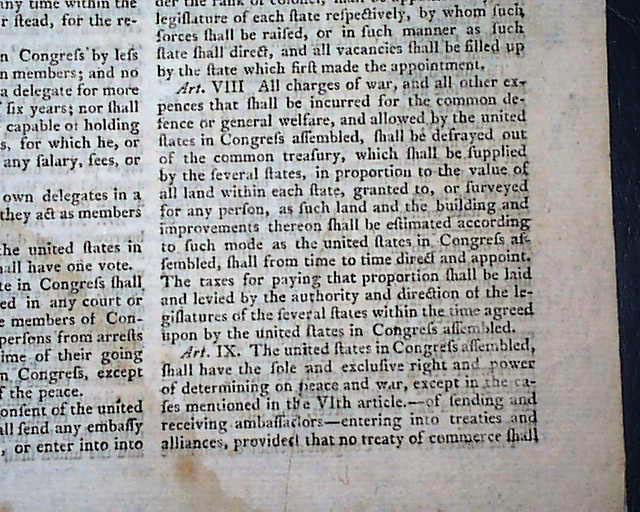 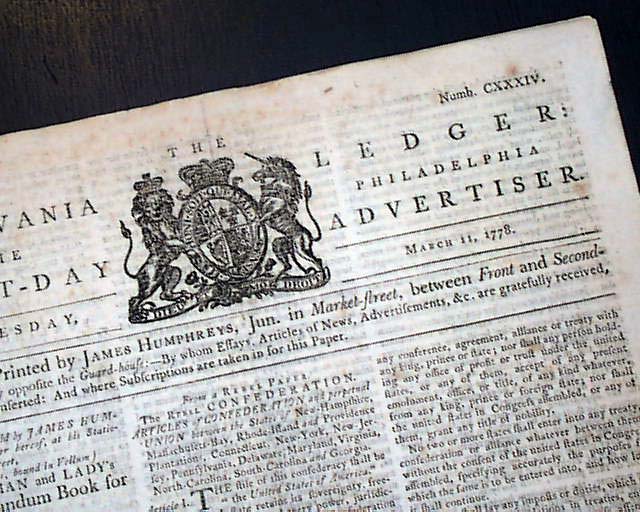 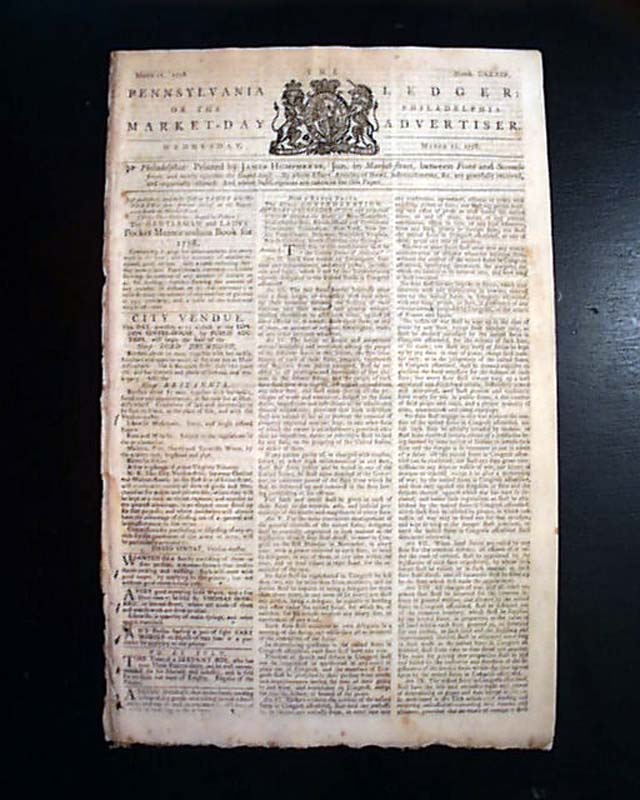 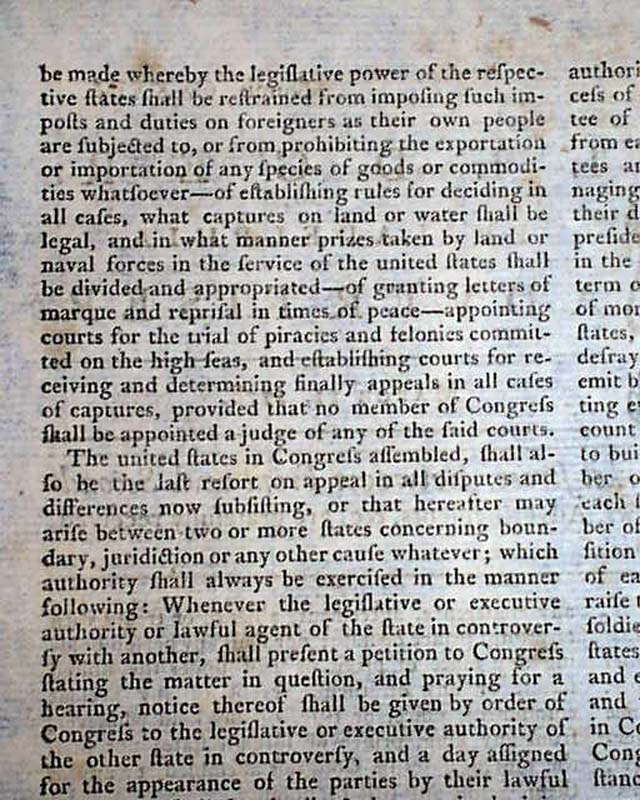 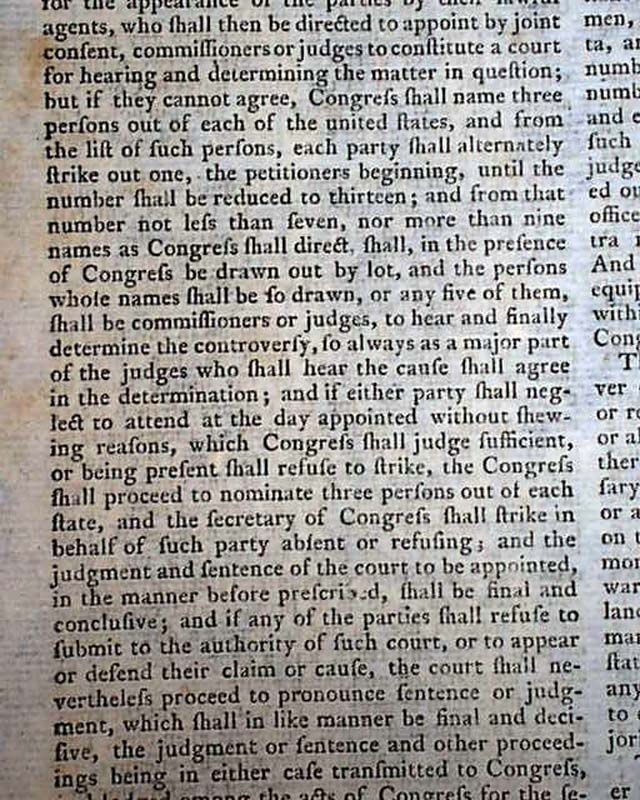 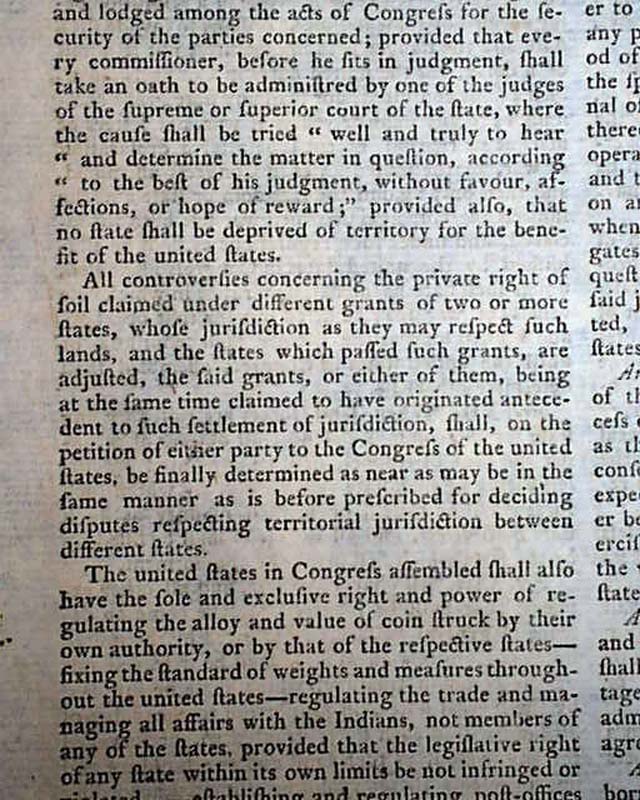 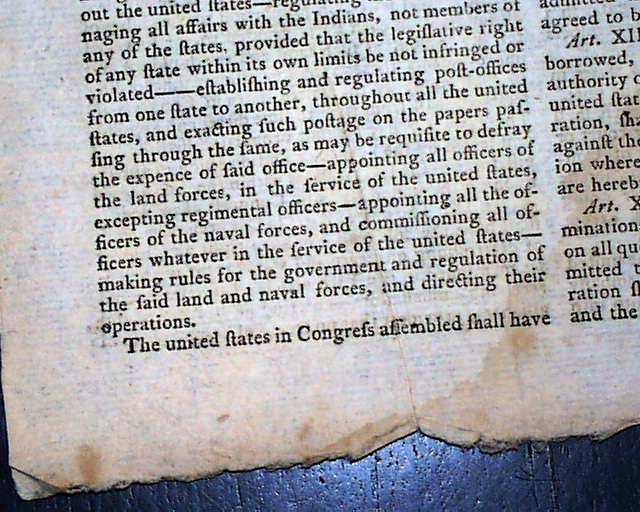 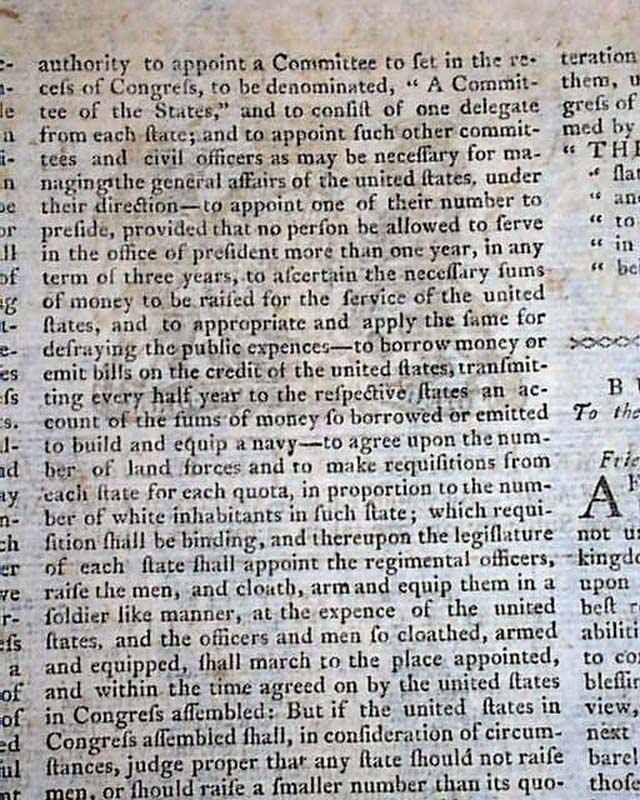 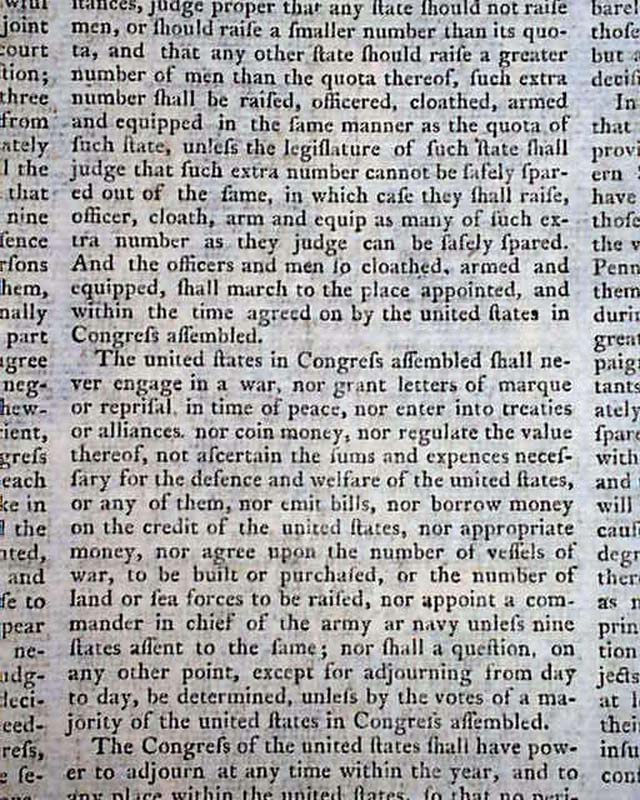 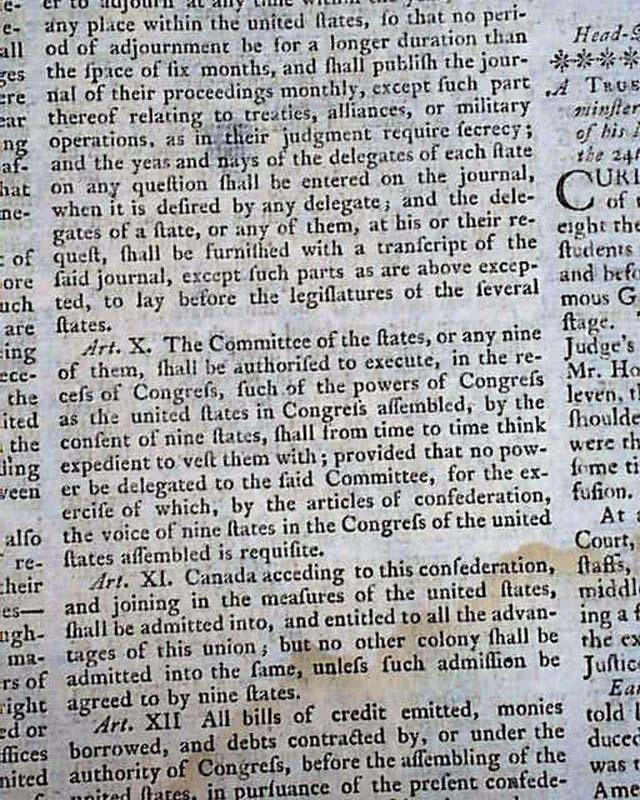 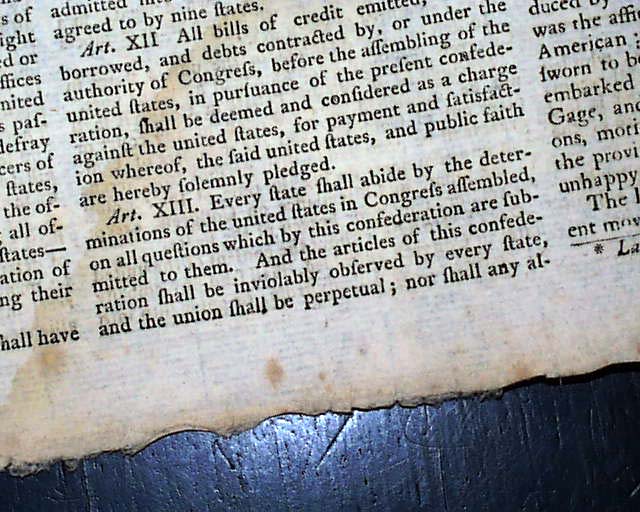 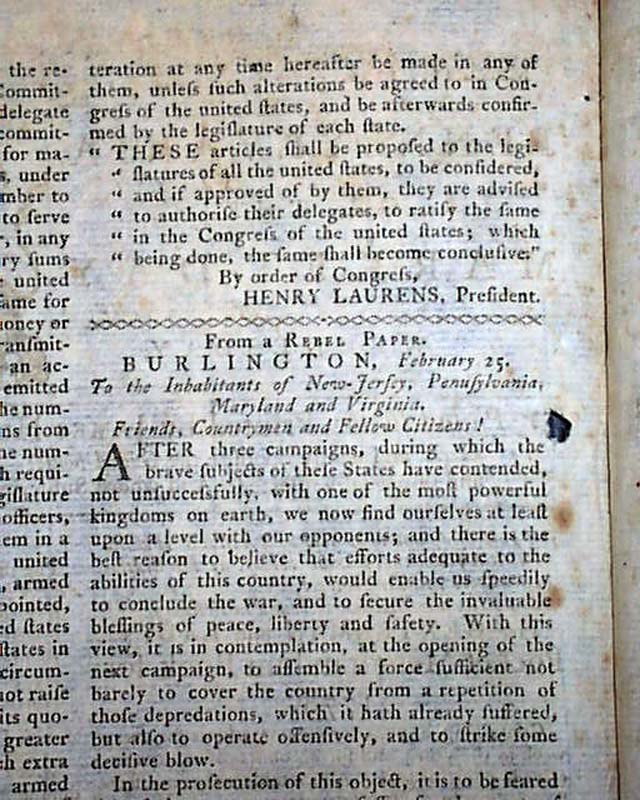 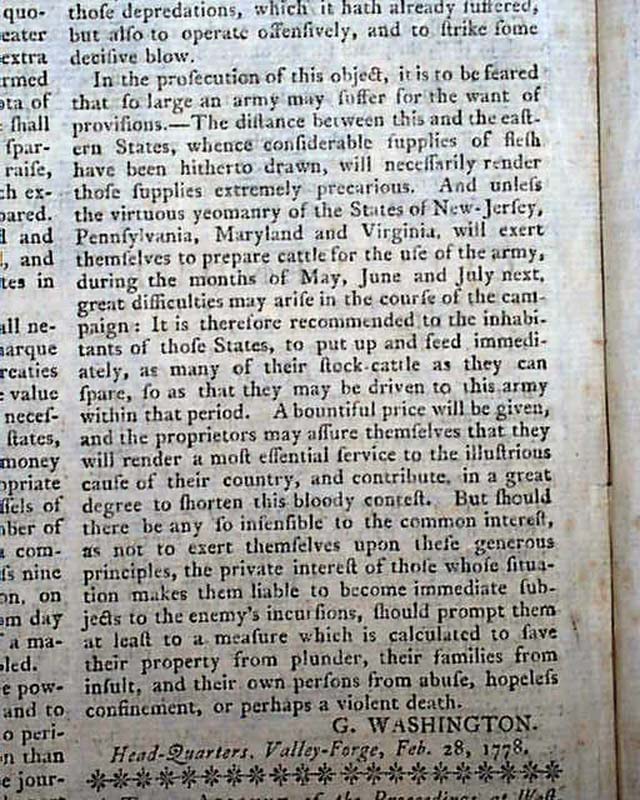