Home > Back to Search Results > Broadsheet "Extra" on the Garfield assassination attempt...
Click image to enlarge 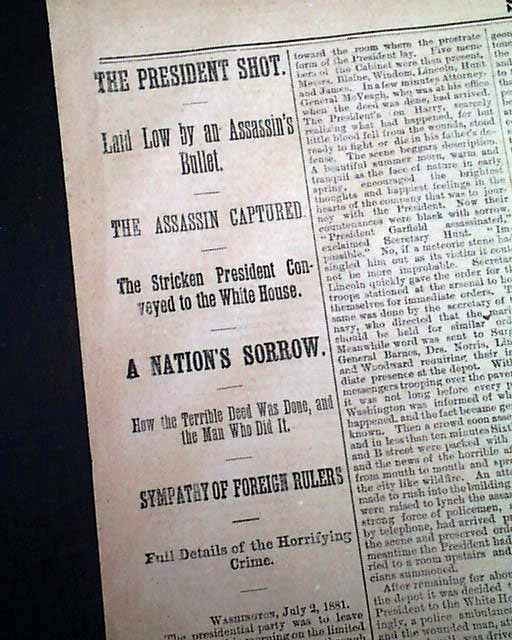 Page 4 has a report headed: "A Terrible Deed--Attempt to Assassinate President Garfield" which begins: "Not having issued a paper last week the Watchman is consequently somewhat late with the news of the attempted assassination of President Garfield at Washington...This sad event took place in the depot of the Baltimore & Potomac railroad office..." with further particulars. This article, along with "Retrospective" which is on Garfield as well, take two columns.
But the prime feature of this issue is the broadsheet headed: "SUPPLEMENT---EXTRA" which has the entire front page taken up with reports on the assassination, with first column heads: "THE PRESIDENT SHOT" "LAID LOW BY AN ASSASSIN'S BULLET" "The Assassin Captured" "The Stricken President Conveyed to the White House" "A NATION'S SORROW" "How the Terrible Deed Was Done, and the Man Who Did It" "Full Details of the Horrifying Crime". This is a single sheet "Extra" which is larger than the regular issue. Both the Extra and the regular issue are in very nice, clean condition.