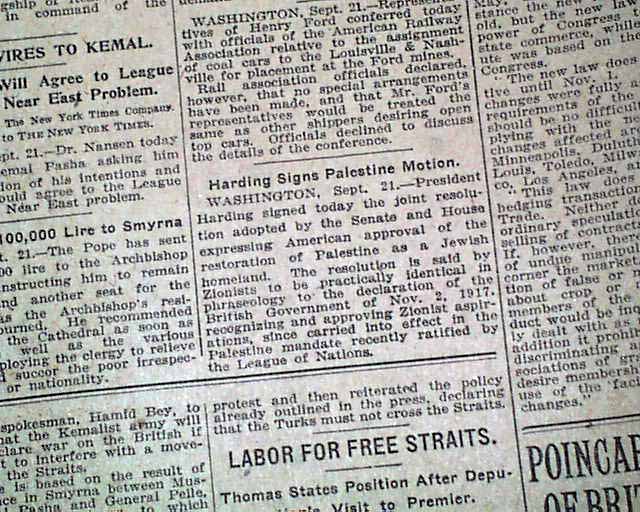 Page two has an historically significant report on the establishment of a Jewish homeland, albeit quite inconspicuous. Headed: "Harding Signs Palestine Motion", the report notes in part: "President Harding signed today the joint resolution adopted by the Senate & House expressing American approval of the restoration of Palestine as a Jewish homeland..." with a bit more. This event was called the Lodge-Fish Resolution.
As a bit of background, President Warren Harding expressed support for a Jewish home in Palestine stating: "It is impossible for one who has studied at all the service of the Hebrew people to avoid the faith that they will one day be restored to their historic national home and there enter on a new and yet greater phase of their contribution to the advance of humanity." This joint resolution of both Houses of Congress unanimously endorsed the "...establishment in Palestine of a national home for the Jewish people," confirming the irrevocable right of Jews to settle in the area of Palestine - anywhere between the Jordan River and the Mediterranean Sea...". He signed the Palestine motion on September 21, the day before this newspaper was published.
A very significant Judaica report on an important step in creating a Jewish statehood, which would not formally happen until 1948.
Complete in 36 pages, even toning, a little irregular along the spine, generally nice.