Home > Back to Search Results > States ratify the Constitution, including the key 9th putting it into effect...
Click image to enlarge 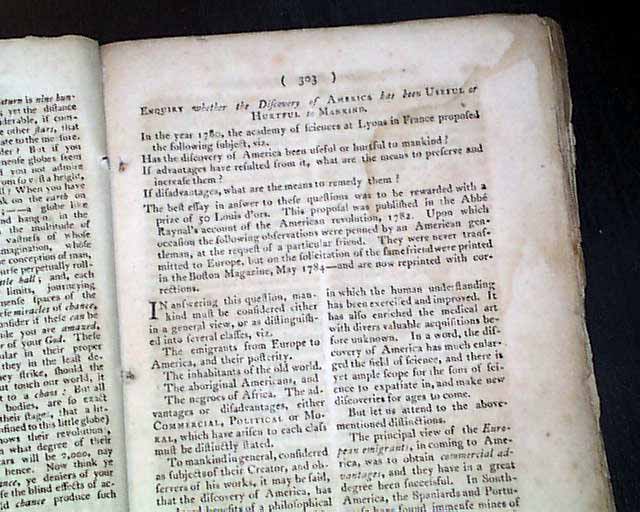 States ratify the Constitution, including the key 9th putting it into effect...

The issue begins with: "A Description of Newbold's Plantation on Indian River" (lacking the plate). Other items include: "The Folly and Absurdity of Atheism" "Enquiry Whether the Discovery of America has been Useful or Hurtful to Mankind" which takes nearly 6 pages; "Extracts from Several Authors Shewing that the Natives of America are Descendants of the Ten Tribes" "Expeditious Method of Curing Wounds" & more.
Included is the full page plate with a related article: "Description of a Furnace for Extracting or Smelting Lead from its Ores". Near the back is "Intelligence" with the latest news reports including an historic report from South Carolina: "A motion was made & seconded; That this convention do assent to and ratify the constitution agreed to on the 17th of September last, by the convention of the United States of America, held at Philadelphia." with the vote of the Ayes and Nays. This report is dated May 23, the day South Carolina officially became the 8th state to ratify the Constitution. The following page notes: "June 27. The constitution was adopted on Saturday last, the 21st instant, by the state of New Hampshire, 57 to 46." This was the 9th state to ratify, officially making the Constitution effective for the country. Also: "A letter from Richmond...says, 'It is supposed there will be a majority of two or three only for the adoption of the proposed federal constitution--both parties are very violent.' " and also: "A letter from New York...Accounts from Poughkeepsie are rather favourable than otherwise...that the idea of rejecting or postponement is entirely laid aside--the question is, whether to ratify conditionally or unconditionally..." with more (see).
Complete in 60 pages, never-trimmed margins, 5 1/4 by 8 1/2 inches, scattered foxing or light damp staining, generally good condition.