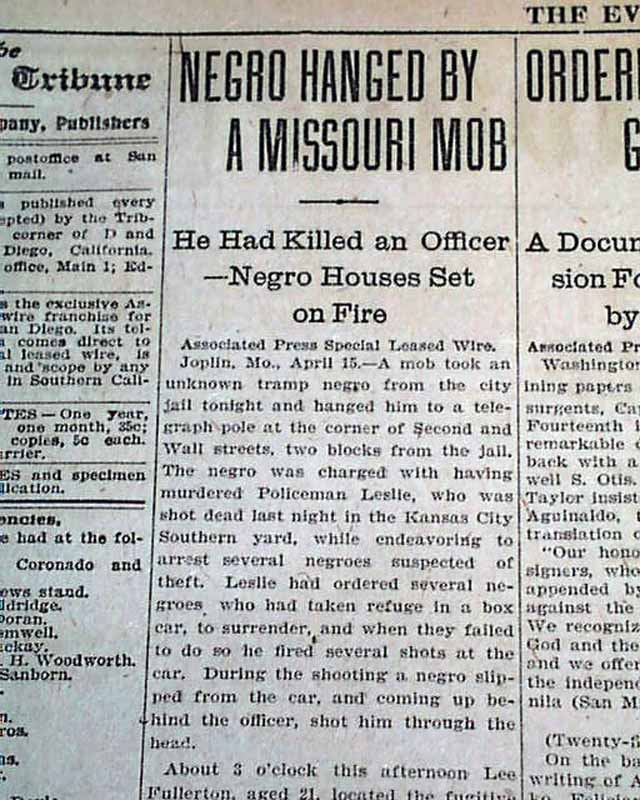 The top of page 2 has a one column heading: "NEGRO HANGED BY A MISSOURI MOB" with subhead. (see) Surprisingly this issue is in good condition being from the "wood pulp" era. Very hard to find issues that are not totally fragile from this era in paper.
Complete with 6 pages, two small library stamps within the masthead, generally nice.

wikipedia notes: On April 15, 1903, Joplin police officers, including Theodore Leslie, 36, were searching nearby rail yards for a Black man who had allegedly stolen pistols from a hardware store when Leslie noticed a man in one of the rail cars. Shots were fired, and Leslie, a father of four, was mortally wounded. Hundreds of men launched a search using bloodhounds. On April 16, a Black man with a weapon, Thomas Gilyard, was arrested, and while he told one of the men involved in the arrest that he had been in the box car, he said several others had been there and that one of them fired the fatal shot. Joplin City Attorney Perl Decker pleaded with the growing mob to break up, according to newspaper and other historical accounts, as did Mayor Thomas Cunningham, but the crowd soon stormed the jail and took Gilyard from his cell. He was lynched soon afterward.[