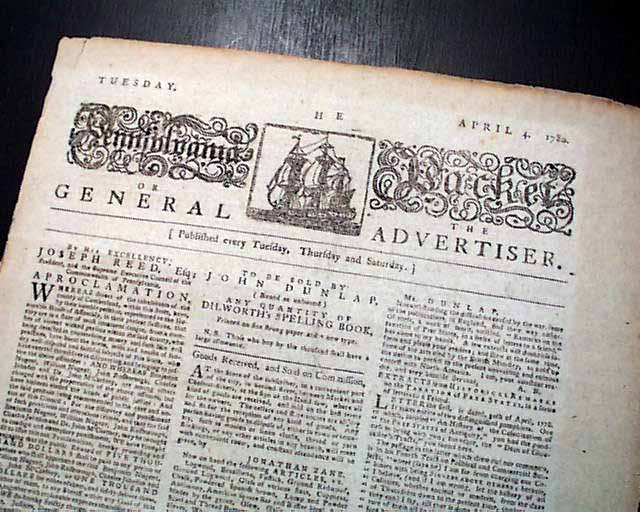 This issue has one of the more decorative mastheads of the colonial era with exceeding ornate filigree work around the lettering, plus an engraving of a 3 masted ship.
The front page has an extract of a letter from Lord George Germaine to Major General Howe which concerns the exchange of prisoners with the Americans. The ftpg. also has: "A Proclamation" by the President of the Penna. Supreme Executive Council, and there is a letter which includes some bits as: "...idea of an alliance with America...What were the grounds & principles on which the power of taxation was founded...bringing the ground of American taxation within the precincts of liberty...is is the nature of them all 'to aspire at Indepenendency'..." and more.
Page 3 has mention that: "...The fleet consisted of 27 sail of merchantmen; but 10 of them parted company the night before they were seen by the English squadron. Paul Jones was not in company with the above fleet, as is reported, but sailed out of the Texel in a foggy night about a fortnight ago in a single ship (the Alliance)...".
There is also a report from Hackensack, New Jersey concerning: "...a descent upon the place by way of the Little Ferry...entered the town they burnt the Court house...then proceeded to Paramus with intention to surprize the detachment of continental troops...In their rout they plundered & abused the inhabitants indiscriminately in a most pitiable manner..." with more.
The back page has a document from "Thomas Paine, Clerk of the Gen. Assembly", a position he held for some months.
Four pages, wide, never-trimmed margins, great condition.