Home > Back to Search Results > The Spindletop oil discovery transforms the oil industry in Texas...
Click image to enlarge 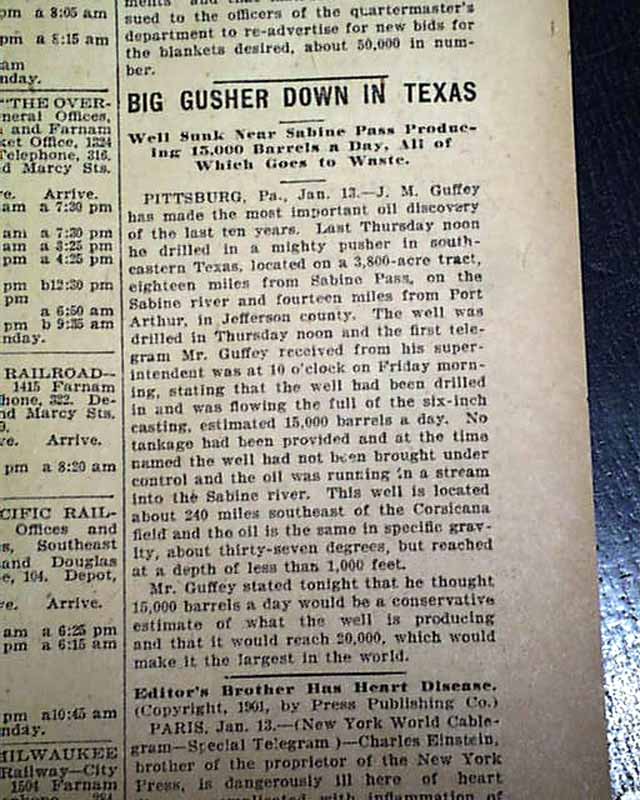 The Spindletop oil discovery transforms the oil industry in Texas...

Although discoveries were made in various locations long before this date, this discovery--to be known as Spindletop--marked the emergence of the oil industry at a time when the automobile and other industries were experiencing rapid growth, coinciding with the need for this new product. The discovery of oil in Beaumont, Texas, was the beginning of the oil industry in Texas. When the well struck on January 10, 1901 it would gusher uncontrollably for 8 days before being capped. (see the hyperlink for more)
Near the bottom of page 7 is the very historic report headed: "Big Gusher Down In Texas" "Well Sunk Near Sabine Pass Producing 15,000 Barrels a Day. All of Which Goes to Waste." The report notes in part: "...made the most important oil discovery of the last ten years...he drilled in a mighty pusher in south-eastern Teas...was flowing the full of the six inch casting, estimated 15,000 barrels a day..." with more (see).
Complete in 8 pages, light toning, a few small binding slits along spine, generally nice condition. Should be handled with care.