Home > Back to Search Results > Report here is a focus of a Smithsonian Channel episode...
Click image to enlarge 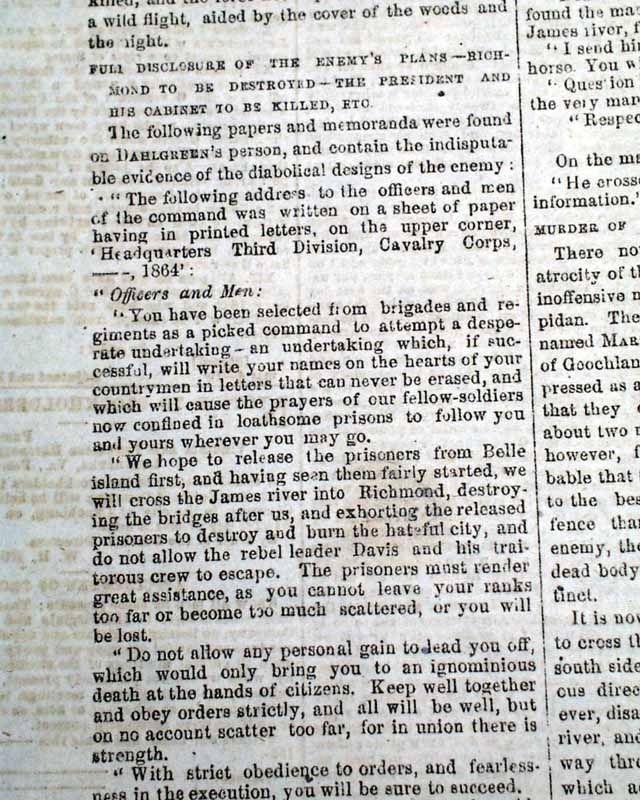 Report here is a focus of a Smithsonian Channel episode...

There is an intriguing story within the front page reports recently brought to fore in an episode of "America's Hidden Stories" on the Smithsonian Channel.
The intrigue is about the capture of papers from Union officer Col. Ulric Dahlgren which included orders to burn Richmond and assassinate the Confederate President, Jefferson Davis. This created an outrage among the Confederates, with a demand that the Yankees disclose who was behind the murder plot. Was it Meade? Was it Lincoln? Was it Stanton? Was Davis implicit in retaliating by ordering the assassination of Lincoln?
The front page also includes: "Another Affair With The Enemy Around Richmond--Capture Of Important Papers And Memoranda of the Enemy" which has several subheads. Also: "Telegraphic Reports of the Press Association--From the Rapid Ann--From the Mississippi--More Fighting In Florida--From Charleston" "City Intelligence" and more. There is also a small item: "Aiding Slaves to Escape--George, slave of Dr. George Leftwitch, was arrested by officers Bibb and Chalkley, charged with aiding slaves to escape, & carrying them to the lines within the control of the enemy."
The back page begins with an interesting editorial which takes 1 1/2 columns. Also: "Latest From The North" "The Virginia Legislature" and a very lengthy "General Order: An Act to Organize Forces To Serve During The War" which takes over 1 1/2 columns.
Complete as a single sheet newspaper, never been bound nor trimmed, in great condition. 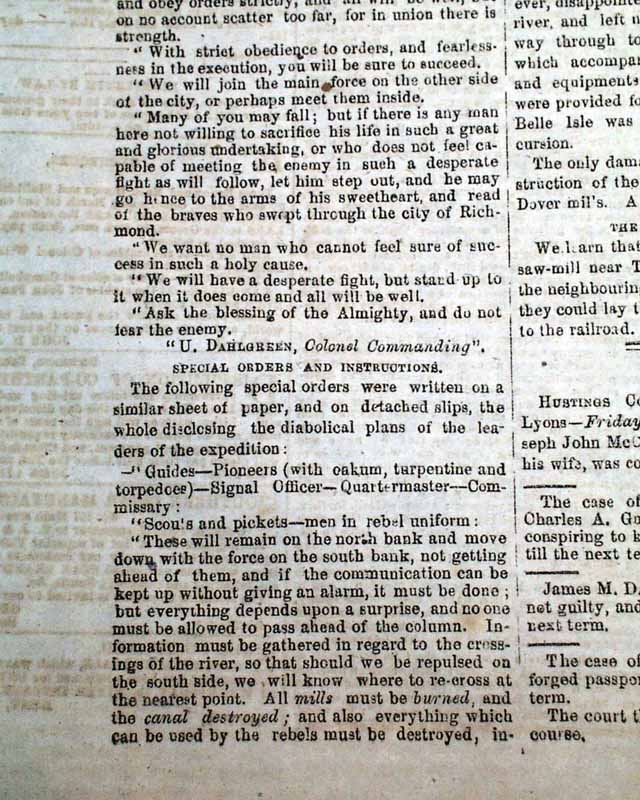 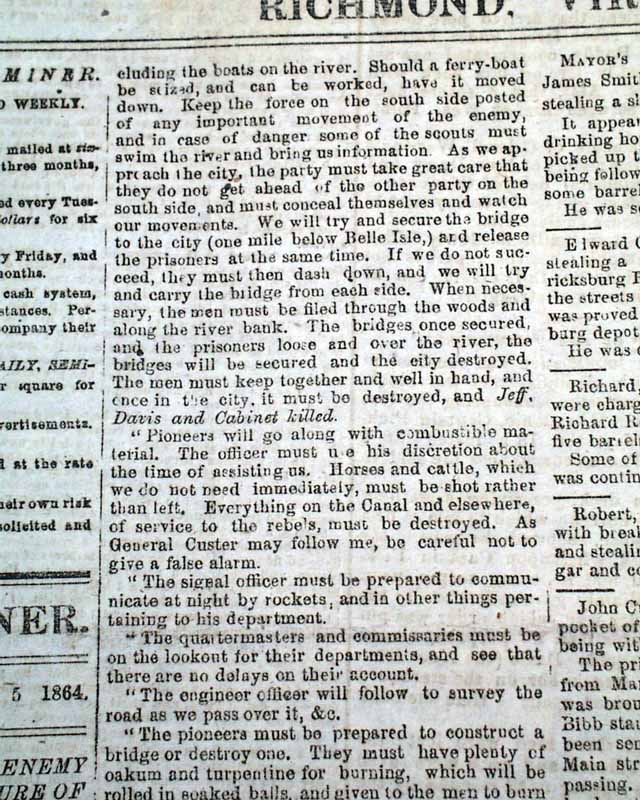 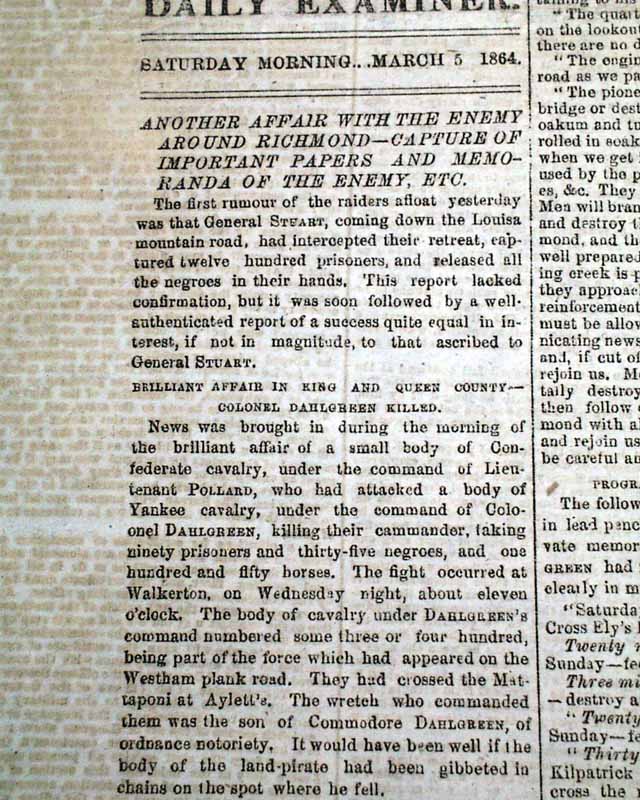 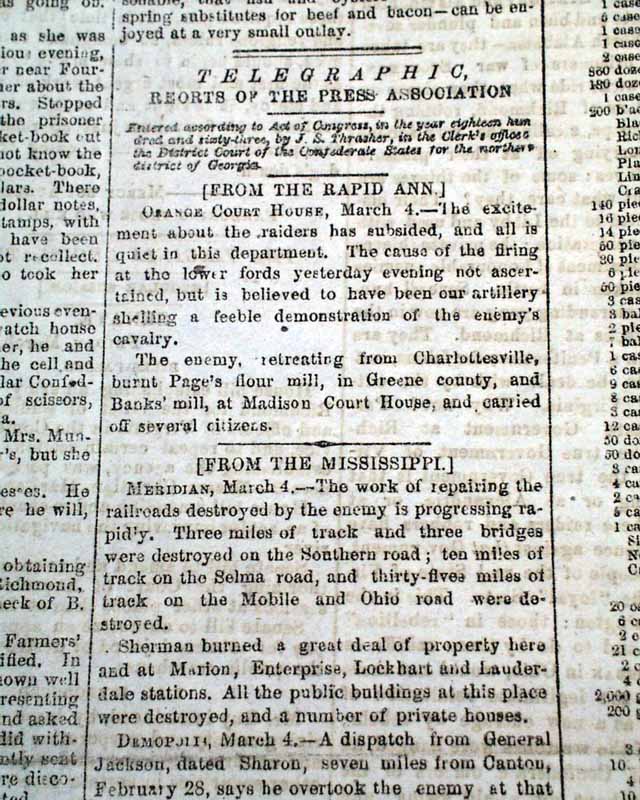 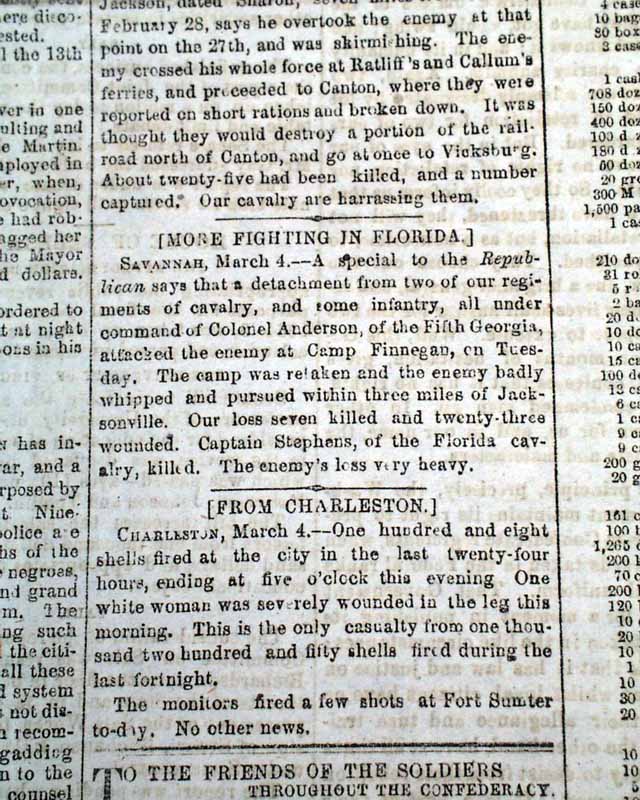 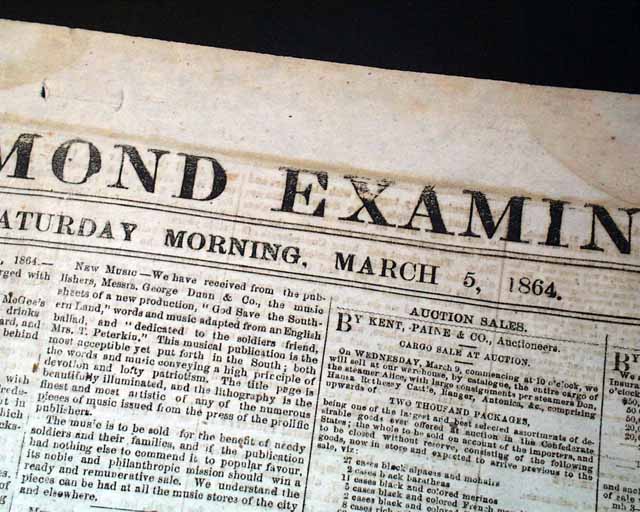 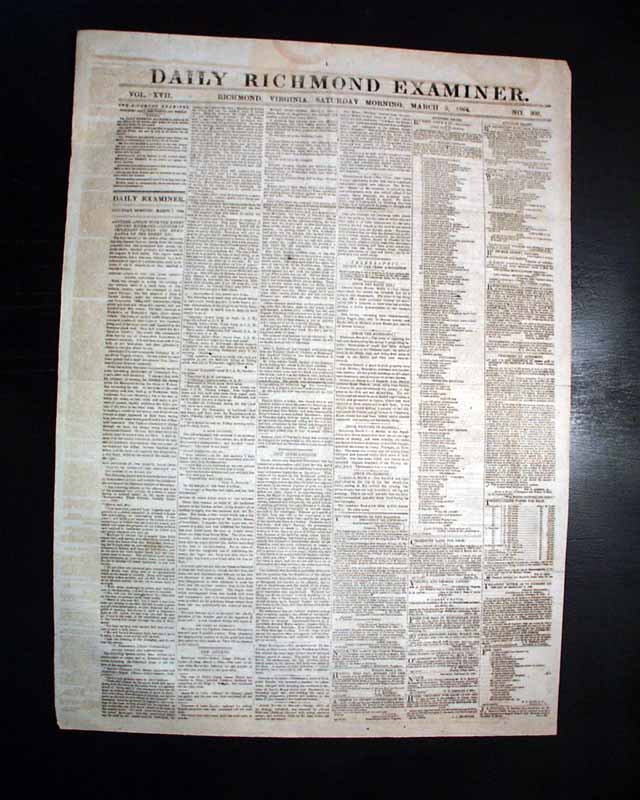 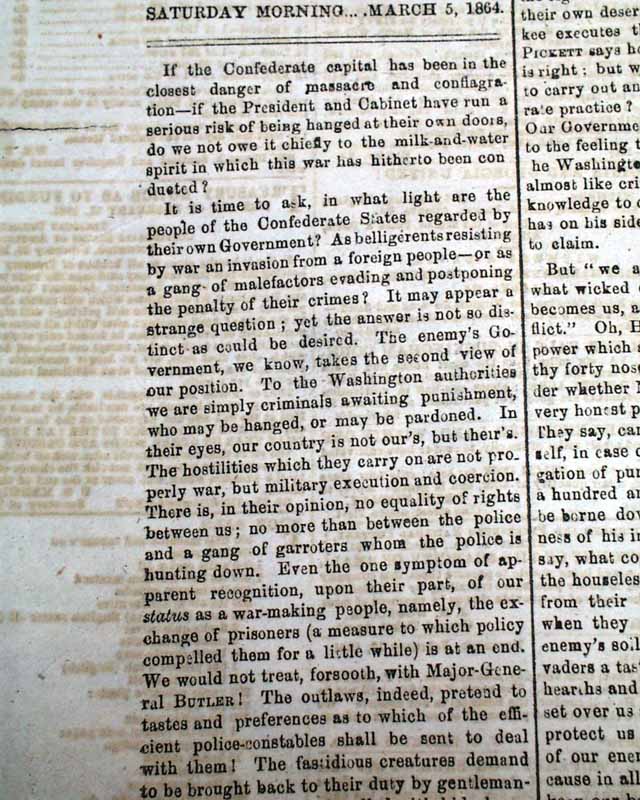 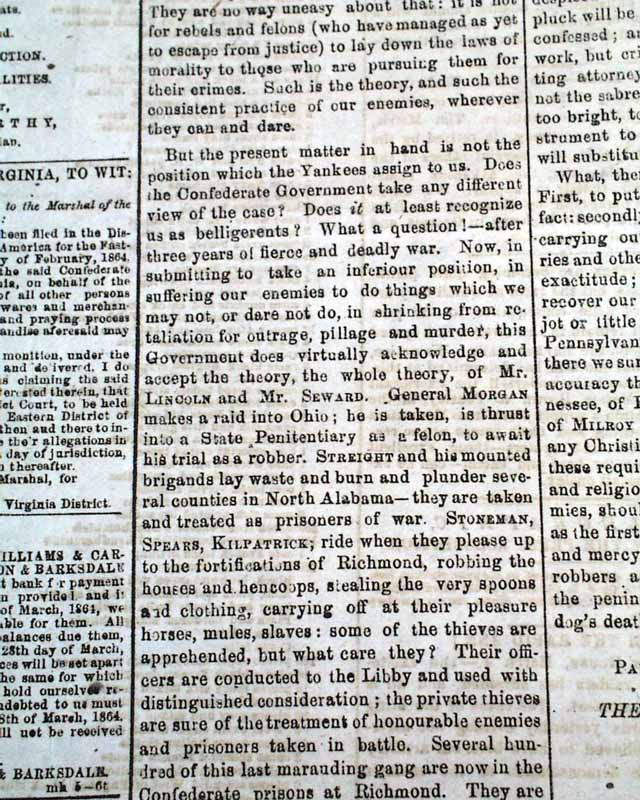 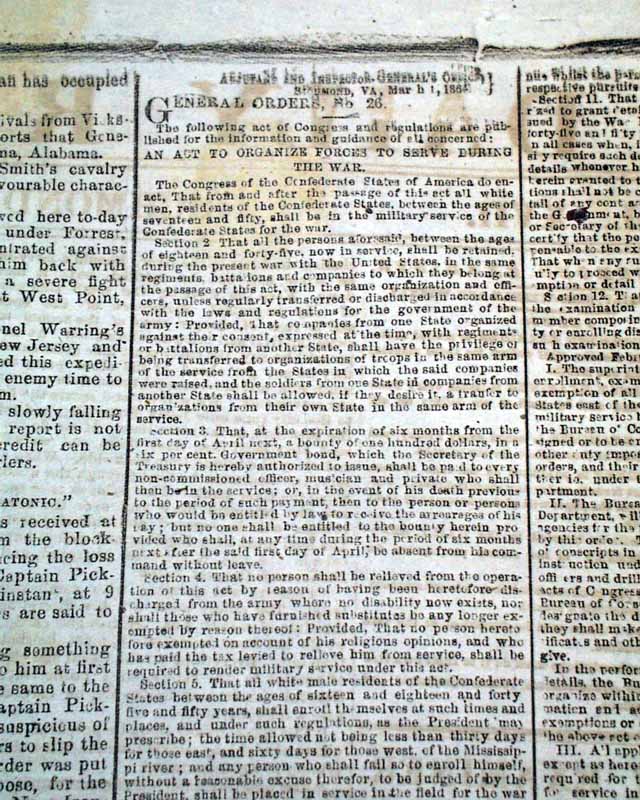 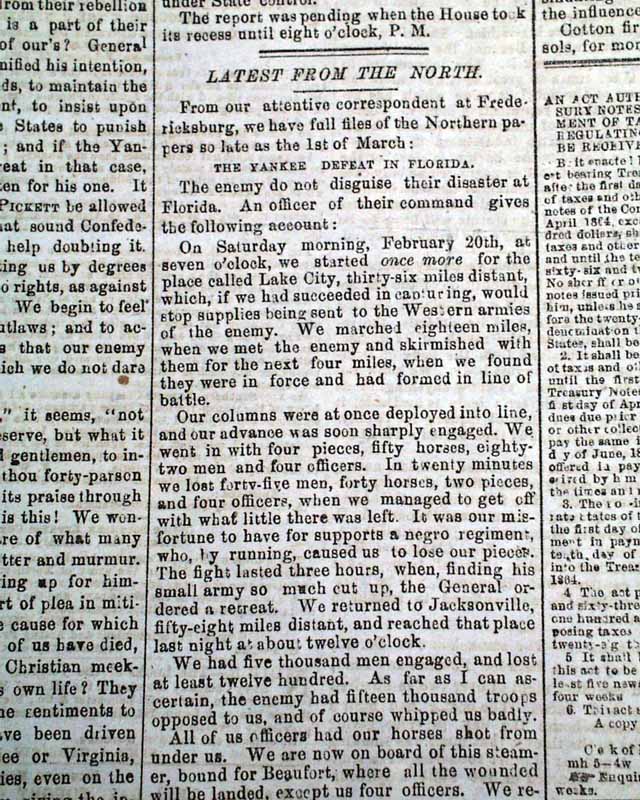