Home > Back to Search Results > The battle in Tennessee...
Click image to enlarge 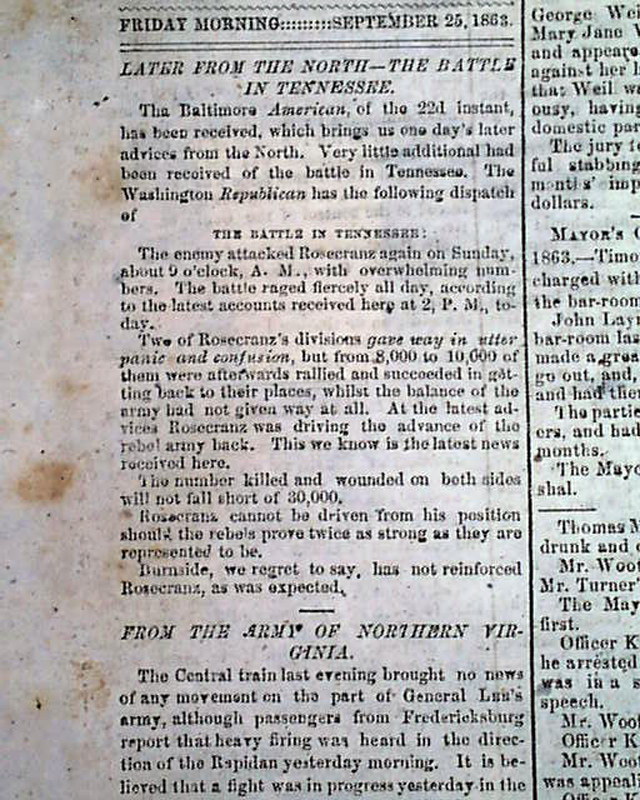 The front page includes: "Later From the North--The Battle in Tennessee" "From the Army of Northern Virginia" and an interesting article at the top: "Atrocities Committed in the South By Negro Soldiers" which includes in part: "...some particulars of the murder of several planters on Deer Creek by some of Lincoln's negro soldiers..." with various details. Also at the top of the page is: "Our Victory In Tennessee" "Our Army Pursuing The Enemy--Chattanooga Re-Occupied by Our Forces--Large Capture of Arms, Supplies, etc. From the Enemy--The Losses on Both Sides--General Hood Not Dead". And also: "Southwestern Virginia  and East Tennessee" and other smaller items.
The back page features the always-interesting editorial, which begins: "There is now but little doubt that Chattanooga has been re-captured, & that the victory of our arms in Tennessee has been crowned by the achievement of a real & substantial success..." and a bit  further  on is: "...Unless there is some great disappointment in reserve, the victory of the Chickamauga implies some of the most important consequences of the war. It should not only secure Kentucky & Tennessee, but it should give us possession of the Ohio & a large portion of the Lower Mississippi..." with much more interesting reading. Also on the bkpg. are reports from: "The Virginia Legislature" and more war reports under: "Additional From the North".
Complete as a single sheet newspaper with a full banner masthead, very nice condition.