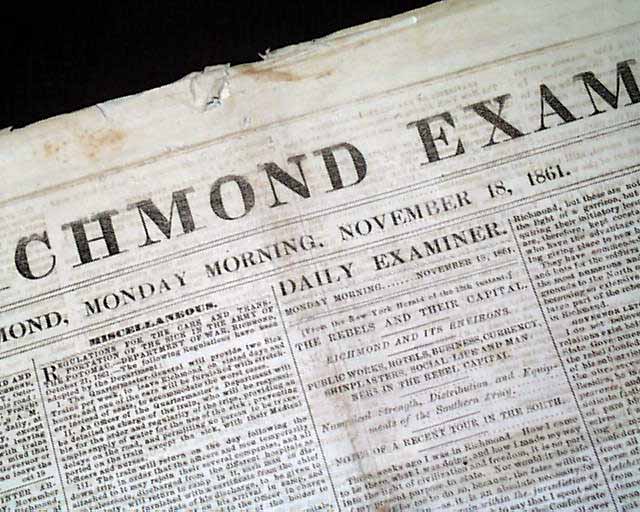 Half of the ftpg. is taken up with advertisements while the other half includes: "The Rebels & Their Capital" "Richmond and Its Environs" "Notes of a Recent Tour in the South" which is a report from the New York Herald.
Page 2 includes an editorial which discusses, in part, the Mason-Slidell affair (small hold causes loss to about 3 words at the beginning: see). Also on page 2 is: "The Latest Northern News" with many subheads including: "Movements & Spirit of the War" "A Grand Torchlight Procession to General M'Clellan" "A Riot in a Northern Regiment" "Mrs. Lincoln in New York" "The War In Missouri--Removal of General Fremont--His Farewell Letter to the Army--Order of His Successor on Assuming Command" "The War In Kentucky--Pen-and-ink Sketches of our General at Columbus, Ky." and much more.
Page 3 has: "The War on the Sea-Coast - The Capture of Port Royal" and more.
Complete in 4 pages, never bound nor trimmed, some wear & tears at the margins plus the mentioned small hole near the right side.