Home > Back to Search Results > Neat title... "THE MOSQUITO"...
Click image to enlarge 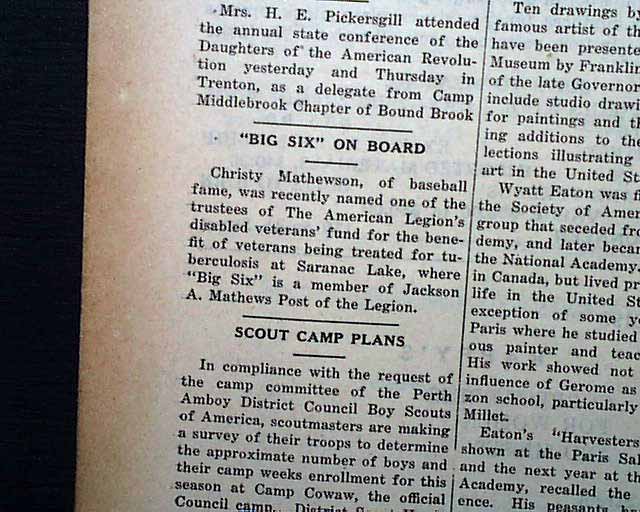 
THE MOSQUITO, Perth Amboy, New Jersey, March 21, 1925  A curious little newspaper which appears to be the combination of the Middlesex Plain Dealer and the Perth Amboy Press. Filled mostly with local news and tidbits, many quite folksy and humorous, plus many ads as well. The ftpg. has a bit noting: "Christy Mathewson, of baseball fame, was recently named one of the trustees of the American Legion's disabled veterans' fund...".
*A volume one issue of a very short-lived title as Gregory notes the last recorded date as March 15, 1926. Issues held by only two institutions.
Eight pages, measures 9 by 12 inches, good condition.

*There is considerable confusion regarding this Perth Amboy title in its various forms. The information provided by "Gregory" and the Library of Congress are in conflict, and both are in conflict with the dating and Vol. # of this issue. This title was very popular in Perth Amboy, with three publications carrying this name: The Mosquito (from 1898-1919), The Jersey Mosquito (from 1919 to 1922), and The Mosquito (1922-1931). The Library of Congress states the last two were connected, but there is no mention of a connection with the first (although the timing is suggestive that they were related to some degree). To add to the confusion, this issue being an issue from 1925 would certainly not lend itself to be a Vol. 1 issue even if we considered the last title (1922-1931) as a "new" title (since it was under a different publisher). Yet, it lists itself as being vol. 1, so we are simply stating what the issue itself says. Unfortunately the history behind the title is incomplete. If anyone can provide additional background regarding this title (in its three forms), and why an issue from 1925 would be shown as a vol. 1 issue, please be in touch.