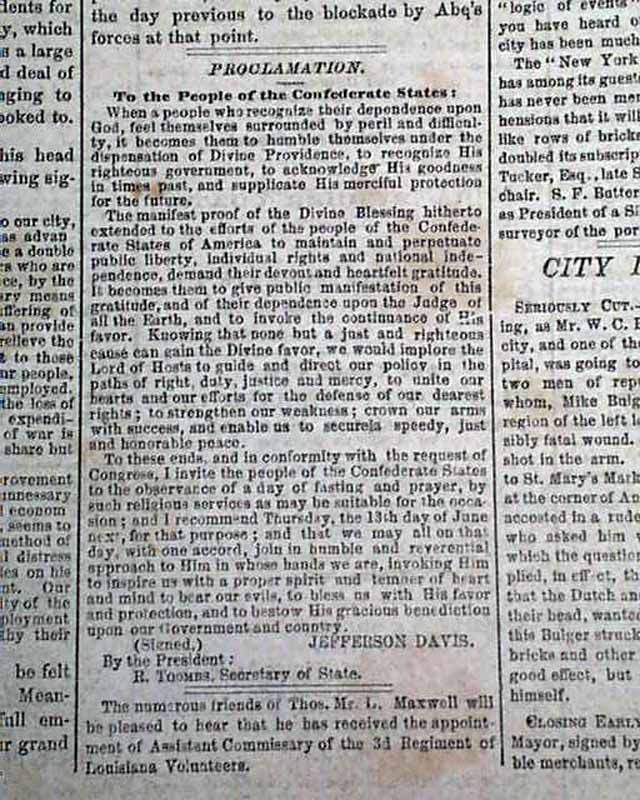 Truly Confederate newspapers from New Orleans are very difficult to find, as Admiral Farragut entered the mouth of the Mississippi in mid-April, 1862 and finally took New Orleans on April 28. Shortly thereafter Benjamin Butler moved in and took control of the city, it surrendering without a fight. So "Confederate" issues from New Orleans are limited to those published between Louisiana's secession from the Union on January 26, 1861 and the end of April, 1862, just a brief 15 month period.
The front page has a: "Proclamation - To the People of the Confederates States" for a day of thanksgiving & prayer, signed in type: Jefferson Davis. More war reports on the front page.
Inside has a report on the removal of the Confederate capital from Montgomery to Richmond. Also column heads: "Victory at Harper's Ferry" "Heavy Loss of U.S. Forces" "Reported Defeat of Federal Troops at Hampton" "Landing Troops from U.S. War Vessels in James River" and more.
Four pages, irregular at the spine margin causes some text loss to unrelated items, foxing, otherwise good.